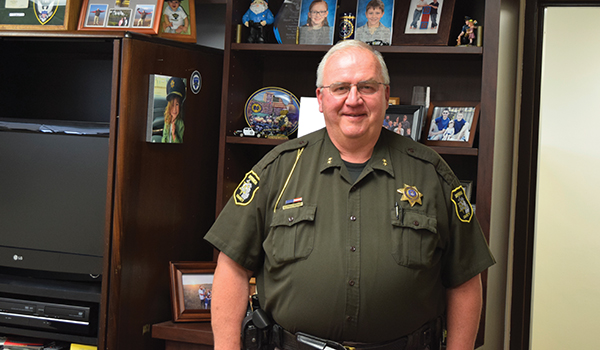 BERRIEN COUNTY – Berrien County Sheriff Paul Bailey is not done yet, but after this term, he is looking forward to some time off.

This year marks the 21st year of being a sheriff for Bailey, who has been a police officer since 1979. He announced at the Niles Charter Township board meeting on Monday, May 17, that he would not be seeking another term as sheriff for the county.

“You always hear people say they have two years left or 500 days left,” Bailey said, about those nearing retirement. “I’m not that person. I enjoy doing what I’m doing. I decided at the end of this term it was time to enjoy life and do something traveling with [wife] Peggy before I get too old and go into a nursing home.”

Surrounded in his office in St. Joseph by photos of people he has worked with and met, including former President George W. Bush, Bailey also has shelves filled with photos of his family. He and Peggy, his high school sweetheart, have four children and 10 grandchildren. Their grandchildren range from eight months old to 15-years-old. He hopes to spend more time with his family, as they have stayed local to Berrien County, and do some traveling with his wife.

After graduating from high school in Eau Claire, Bailey initially studied to work with special needs children and studied at a college in Minnesota before coming back to Western Michigan University.

“I became friends with some Portage police officers that I rode around with,” Bailey said. “I thought I really liked that. I changed my mind about which profession I wanted to get into.”

From there, he sent himself to the Police Academy at Kalamazoo Valley, and was hired shortly after at Schoolcraft Police Department. After “four or five minutes,” Bailey said Peggy wanted to move back closer to family, so he put out applications. In May 1980, he was hired as the chief of police in Stevensville at just 24 years old.

He would work his way around the county before being elected Berrien County Sheriff in 2000.

Throughout his time in law enforcement, Bailey has seen many changes in police work, from dashboard cameras, body cameras to more education for officers.

“I’ve been very blessed to be able to hire people who love public service. The challenging thing is dealing with different changes in technology and not falling behind,” Bailey said. “Working with county commissioners to be able to have a budget so that we can still do those things. They’ve been very good about understanding the importance of public safety. When I started, there wasn’t cameras in the cars. That’s not something that is cheap.”

Bailey’s roots in public service show when he talks about the programs the Berrien County Jail and law enforcement teams have put together through the years.

“I think [law enforcement] is a service, and [officers] want to make a difference, help people, and hold people accountable who make mistakes. Hopefully, they will get into the right programs,” Bailey said. “What we have now is not just arresting someone, locking them up and throwing away the key. They go through the system, in specialized courts.”

Domestic violence, drugs and mental health courts all evaluate offenders, and Bailey believes they can help the people in the system engage with programs to be rehabilitated.

For inmates serving time sentenced, Bailey is proud of his team of volunteers and professionals in the jail who offer ministries and services throughout the weeks and months.

He is quick to credit members of his department for stepping in, acquiring extra training and initializing other programs throughout the county. Programs that have grown, including working with U.S. Homeland Security, the Federal Bureau of Investigations and more.

The Victim Services Unit is also a newer program within the department Bailey spearheaded. The unit is comprised of volunteers that help residents who have experienced a fatality or a suicide understand how law enforcement proceeds. They also are there to guide the family to services on grieving and navigating the crisis.

“I’m very proud of that volunteer team that we have that helps people in the worst time of their life. [They] help them get through those first days that something bad happens to a family member,” Bailey said.

Throughout his career, Bailey has worked several different positions working as a patrolman, and conducting Neighborhood Watch and Crime Stoppers programs.

Even after he retires after his term ends in about three and a half years, Bailey plans to stay in Berrien County.

“It’s where our family and our kids are,” Bailey said. “I plan on doing volunteer work.”