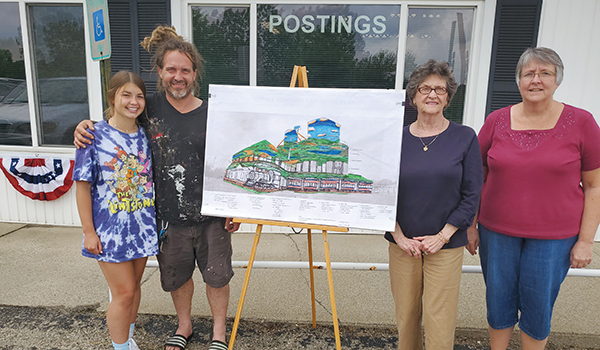 EDWARDSBURG — A portion of Edwardsburg is getting a facelift.

This week, the village of Edwardsburg launched the All Aboard Mural Project, which will add a mural depicting a colorful sky, train, and local landmarks and business onto a grain mill located at the corner of M-62 and Elkhart Road. According to project organizers, the mural will be an extension of the recently completed All Aboard Project, a grant-funded program that brought flowers, trees and landscaping along the railroad tracks on M-62.

“Our community is bisected by the railroad, so we are rolling with this theme and beautifying our community,” said Roseann Marchetti, Cass County commissioner representing the Edwardsburg and Ontwa Township areas.

Marchetti and Village Clerk Paula Ralph estimate the project, including equipment and labor costs, will cost around $120,000. To raise that amount, they will be looking into possible grants and are fundraising using a GoFundMe page.

For the project, the village tapped Chris Stackowicz, a muralist specializing in larger-than-life art. He is known locally for his work across Michiana, including large pieces in Cassopolis, South Bend and Niles.

A new Edwardsburg resident, Stackowicz said he was excited to take on the project.

“I wanted to do a project close to home,” the artist said. “I wanted to contribute something to my new home.”

All involved with the project believe it will become a village landmark and draw visitors to the area.

“It’s going to bring people here just to see that,” Marchetti added. “It’s going to create some real interest in the community and a sense of place.”

Marchetti and Ralph hope to have the mural complete by Labor Day. With the shortened timeline, Stackowicz said he would welcome community volunteers to help with the project and have tasks available for all skill levels.

“We want the community to be involved,” Stackowicz said.

Once the mural is done, organizers said they plan to continue to build off the momentum of the All Aboard Project and continue to improve the Edwardsburg area, including with a to-be-announced future project at Gunn Park.

“We aren’t done,” Marchetti said. “We are far from done.”

“We are jumping on board,” Ralph added. “We want everyone to jump on board with us.”

To donate to the project’s GoFundMe page, visit gofund.me/71664da0 or All Aboard Mural on Facebook. For businesses looking to sponsor the project and be featured in the mural or volunteer, contact the village at (269) 663-8484.