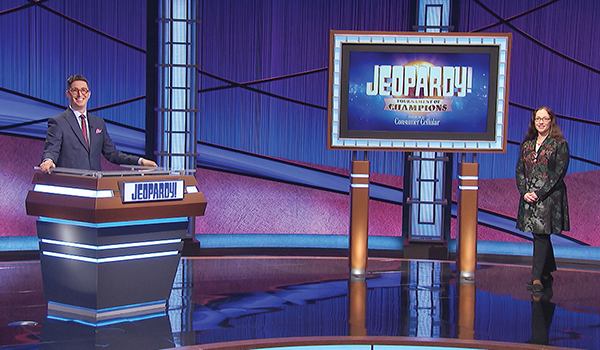 DOWAGIAC — When the stage lights come on, Jennifer Quail rises to the occasion.

The Dowagiac resident and “Jeopardy!” veteran advanced to the “Jeopardy!” Tournament of Champions finals this week.

Quail and the other contestants were invited to participate in the Tournament of Champions last fall. The tournament was initially set to take place in January before being pushed back to spring due to the ongoing COVID-19 pandemic.

Armed with knowledge of what to expect from the show, Quail tweaked her preparation plans.

“I probably studied a bit more,” she said. “I had a better idea of what my weak categories were. If you have been in tournaments, you know that questions are going to get harder. I did more sports trivia, focusing on trophies and different leagues.”

The recent passing of game show host Alex Trebek was a tough pill to swallow for Quail and her fellow contestants, each of whom spent considerable stage time with the game show icon. That being said, Quail had nothing but good things to say about guest host Buzzy Cohen, who has presided over the Tournament of Champions.

“I think Buzzy is a fantastic host,” she said. “He does a great job. He did his research and watched tapes of Alex hosting and watched how he timed the board. The way questions are read is a big part of timing your answer.”

A former “Jeopardy!” contestant himself, Cohen was able to understand and empathize with the contestants following Trebek’s passing.

“He knew how hard it would be for us,” she said. “It’s bittersweet. I liked and respected Alex, and Buzzy has been great. It has gone as smooth as it possibly could.”

The loss of Trebek was not the only major change Quail and her opponents felt upon returning to the set. The COVID-19 pandemic greatly affected how the Tournament of Champions was organized.

“They told us guests were not allowed,” she said. “We had to be shuttled in groups and maintain social distance. Instead of the show taking place in the ‘Green Room’ the show is on the Wheel of Fortune set. It’s a bit disorienting after being there before COVID.”

Before the dust on the Tournament of Champions began to settle, contestants created a group chat for them to keep in touch.

“We threw it together on Tuesday, and we kind of  kept it going,” she said. “It’s like meeting all of these family members you didn’t know you had. We’ve been having fun with it.”

When she is not playing a high-stakes trivia game on national television, Quail works as a wine-tasting consultant for Domaine Berrien Cellars in Berrien Springs. She enjoys writing, traveling and writing while traveling. A published author, many of her short stories have been sold to magazines and anthologies.

“One of the best things about going on ‘Jeopardy!’ is that I get to go to California and not Indiana,” she said. “It’s nice to not have to shop in Mishawaka.”

Quail has enjoyed participating in a game show experience unlike any other.

“I think the big thing is the longevity,” she said. “Thirty-six seasons with Alex as the host, it’s an institution. We grew up with ‘Jeopardy!’ Alex always wanted to be introduced as the host and wanted the show to be about the contestants.”

Quail believes the show’s accessibility is one of its defining features.

“It’s challenging, but it’s not impossible,” she said. “For a lot of people watching at home and following along, it’s fun to watch. Seeing contestants get stumped when you’re at home with the right answer is a neat feeling that people feel good about.”

SISTER LAKES — A historic local business learned some new tricks that it was eager to show off on Thursday.... read more