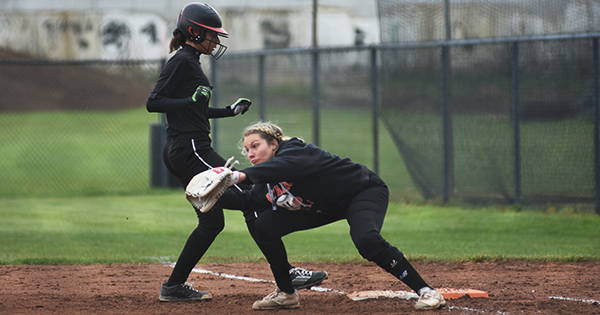 Jessie Hulett and the Dowagiac softball team tuned up for the upcoming state tournament with a split against Decatur Thursday. (Leader file photo)

DECATUR — The Dowagiac baseball and softball teams traveled to Decatur as it continues to tune up for the upcoming state playoffs.

Dowagiac got off to a quick start in the opening game as it scored four runs in the first inning before extending its advantage to 6-0 with single runs in the third and fourth innings. The Raiders cut the lead to 6-2 with a pair of runs in the bottom of the fourth, but five more runs over the final two innings for the Chieftains broke open the close contest.

Dowagiac (10-16-1) started the four-run first inning when Jordan Simpson was hit by a pitch. Back-to-back singles by Ethan Hannapel and Cole Weller drove in the first run of the frame. After a strikeout, another hit by pitch loaded the bases for Hannapel, who drew a walk to make it 2-0.

A walk to Logan Wallace extended the Chieftains’ advantage to 3-0 before Chris Mosier singled to drive in the fourth and final run of the inning.

Dowagiac finished with 12 hits in the game, including two each by Weller, Kanyon Binns, Henry Weller and Wallace.

Henry Weller went the distance for the Chieftains to pick up the victory. He allowed two runs on three hits with four strikeouts and no walks.

In the nightcap, Dowagiac jumped out to a 3-0 lead on the Raiders in the top half of the first inning only to have Decatur single runs in the first, second and fourth innings to tie the game at 3-3. Dowagiac would score four times in the sixth to pick up the victory.

With two outs, Simpson reached base on an error to start the sixth inning rally. Following an error, Cole Weller singled, and Binns tripled to drive in a pair of runs before coming home to score the final run for the Chieftains on a single by Henry Weller.

Dowagiac, which will face Niles in the opening game of the Division 2 District at Lakeshore High School Tuesday, had 10 more hits in the second game.

Sierra Carpenter tossed a three-hit shutout in the opening game against the Raiders Thursday.

Carpenter struck out 10 in going the distance.

Dowagiac (17-11) made the most of their eight hits. Carpenter was 2-for-4, both doubles, and three RBIs. Caleigh Wimberley also had a double.

Mollie Latham had a walk-off, two-run single in the nightcap, to lift the Raiders to the split.

Both teams scored three runs in the seventh inning.

The Raiders (15-11) also got an RBI single from Cecillia Conforti.

The Chieftains were held to five hits in the contest by a pair of Decatur pitchers. Carpenter was 2-for-3 with a pair of RBIs. Anna Dobberstein also drove in two runs.

Carpenter started in the circle, but was relieved by Jessie Hulett in the second inning. Aubrey Busby came on to relieve Hulett after one inning, and suffered the loss.

Dowagiac will now turn its attention to the Division 2 District at Edwardsburg. The Chieftains will face the winner of the Niles-Paw Paw pre-district game, which will be hosted Tuesday, in the first semifinal, which is scheduled to begin at 10 a.m. June 5.

Man sentenced for causing accident that killed his cousin

CASSOPOLIS — A Cassopolis man will be spending the next 13 years in prison after being sentenced Friday in Cass... read more