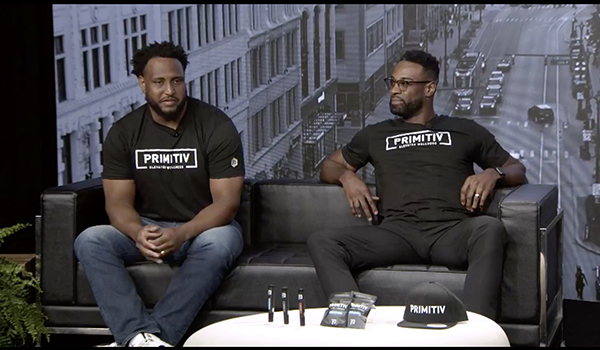 NILES – The former Billiard Garden at 1286 S. 11th St. in Niles has undergone a renovation throughout the past year and now bears the new name: Primitiv Elevated Wellness on its façade.

On Tuesday, Primitiv Group, posted a video of the building in Niles on Facebook, with the caption “coming soon.” Former NFL Detroit Lions wide receiver Calvin Johnson’s and former guard Rob Sims’ cannabis brand, Primitiv, may soon be on its way to the location.

Thursday, Sims and Johnson sat down with ESPN’s Eric Woodyard on JARS Roundtable series to discuss their products and journey to cannabis. Afterward, the two were making a live appearance at the JARS Cannabis River Rouge location.

Sims said their product line is new to the market.

During the roundtable, Woodyard praised the two for a successful career pivot.

Sims said he and Johnson were venturing into real estate, and then cannabis real estate, when they faced a denial and learned about licensing.

“In business, as with football, you have to go through the bad times to get to the good. That’s just life,” said Sims, co-founder and chief strategist for Primitiv. “It was all about how can we bring the most polished product to market — something that was authentic and behind what we stood for and we believe in.”
Johnson, co-founder of Primitiv, said he approached cannabis the with the same precision he approached gameplay.

“I was like ‘let’s get to the science of this.’ I would use [cannabis]. It would help with my pain and my sleep,” Johnson said. “When I was doing ‘Dancing with the Stars,’ my ankles were swelling up just like when I was playing. I thought about quitting the show.”

A friend in the Los Angeles area handed him a topical product derived from cannabis, and the inflammation went down.

Sims and Johnson both deal with pain from injuries sustained during their football careers. Sims used cannabis during his recovery from a torn pectoral muscle in order to keep himself from depending on opioid pain killers.

“I’ve got something that is natural and an alternative to that I can rely on to be safe. My kids can have a dad. My wife can have a husband. That’s a big part of our story,” Sims said.

More information about where Primitiv’s products can be found will be available on PrimitivGroup.com.

DOWAGIAC — Dowagiac District Library’s poetry contest’s results are in, and a pair of local poets stood above the rest.... read more