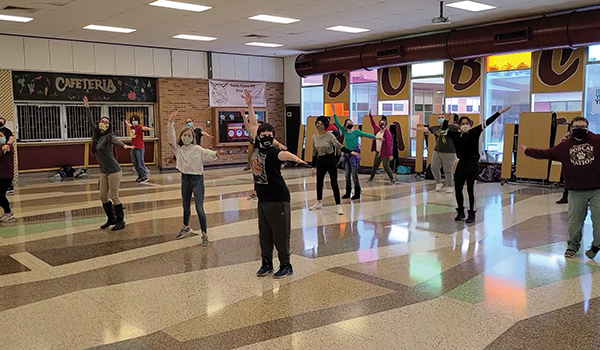 NILES – The show must, can and will go on for Brandywine Middle and High School students in their production of “Fame: The Musical Jr.”

Brandywine Musicals will host four performances that may be accessed through an online ticket to watch the musical beginning 7 p.m. on May 27 through 30.

The musical is set in New York City in the 1980s at a high school known for its performing arts.

“Fame Jr. is the bittersweet, but ultimately inspiring, story of a diverse group of students who commit to four years of grueling artistic and academic work,” according to Musical Theatre International.

“The performance will start at 7 p.m., and it runs on its own. [The audience] can’t rewind or pause,” Smith said.

The start time creates a viewing experience for the audience that is akin to being in a seat by the time the music begins and the curtains part, he said.

Smith found the “Fame: The Musical Jr.” script as he was searching for something students could begin rehearsing earlier in the school year.

“We had different options on how to put on a show,” Smith said. “With everything being as it was [uncertain], remote [viewing] was the safest option.”

Smith had witnessed the elementary school’s musical performance in March 2020 get canceled due to the mandated shutdowns from COVID-19.

“The weekend before they were to perform, we got sent home,” Smith said. “The students had put all that work into it and were ready to go, and we had to go home. This year, we decided that even if something like that happened, we could still perform.”

The production of “Fame: The Musical Jr.” utilizes performances rehearsed starting in person, but ending in a virtual format.

There is one scene where students were filmed together, socially distanced, and others where they performed their lines in a Skype chat-type window.

“It’s hard to get a good performance when you don’t have that back and forth, so those were the two methods we used,” Smith said.

The musical will be performed by 19 students in grades seventh through 12th at the Brandywine Middle/High School.

They rehearsed outdoors and in areas students could be spaced out to begin with, before transitioning to the digital rehearsals.

“We were able to learn in a kind of traditional way for cast members new to drama, so we could give them an idea on how things normally go,” Smith said. “We blocked some scenes like hey would be on stage, but mid-April, we changed to filming and virtual rehearsals. We didn’t want to come to a show next year and think we could just do virtual.”

Preparing for both virtual and in-person performances will help students adapt to whichever medium is available to them in the future, he said.

The musical was chosen with both virtual and in-person rehearsals in mind, as well as the nature that it follows students at a performing arts school.

“There isn’t one lead character,” Smith said. “It felt fun, and something that was going to be little more simple to do in a virtual sense.”

More information on performances and ticket sales can be found at the Brandywine Musicals Facebook page. Show tickets can be purchased at bit.ly/bwmFAME.