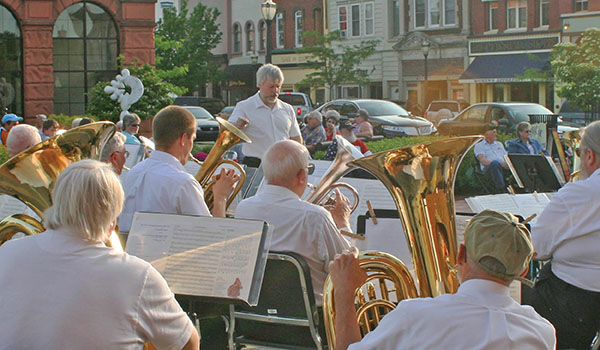 DOWAGIAC — One of Dowagiac’s most popular events is set to take the stage once again this summer.

The Dowagiac Summer Concert Series is set to return to downtown on the grounds of the James E. Snow Professional Building starting Thursday, June 3.

“We’re excited to hit the stage running, as we move closer to a post-pandemic time,” said Greater Dowagiac Chamber of Commerce program director Vickie Phillipson, who oversees the performance series.

The series, which is annually hosted weekly during the summer months and dates back more than 25 years, canceled its 2020 season due to the COVID-19 pandemic.

The first act of the 11-week series will be the Southwestern Michigan College Brass Band, under the direction of Mark Hollandsworth. Each concert will take place from 7:30 to 8:30 p.m. on Thursday evenings.

The music genres showcased in the concert series range from R&B to blues, classic rock, folk and country, according to Phillipson. The public is encouraged to bring lawn chairs for seating and is welcome to picnic on-site.

“It’s great to have it back,” said Vincent J. Jewelers owner and COC board member Jim Frazier. “The concert series draws people. It caters to an older crowd normally, depending on the bands that are coming. There’s a variety of different music.”

While the concert series has historically taken place at Beckwith Park in downtown Dowagiac, the James E. Snow Building lawn has played host to the event in recent years due to construction at Beckwith Park.

The recently constructed performance pavilion, located on the Dowagiac District Library campus, may host future summer concerts and other programming, but according to library director Matthew Weston, the library’s contractor said the grass around the new venue may not fully take hold until later in the summer.

Frazier looks forward to the return of prominent summer events to the city and hopes the increase in event traffic will help local businesses.

“We’ve got to get back to some form of normalcy,” he said. “Businesses can’t survive without promotions in town. Our festivals are coming back, Summer in The City and the Rod & Roll Auto Show are coming back. Hopefully, this means we’re back on track.”

The series’ scheduled performances are as follows:

DOWAGIAC — A local organization is honoring a long-time member who passed away. The Town and Country Garden Club of... read more