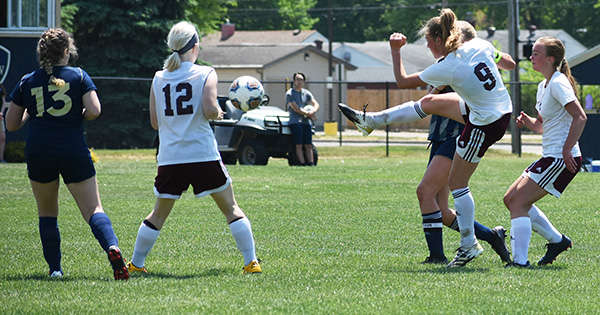 Philip now has 33 goals, surpassing Rica Mitchell, who had 32 goals.

Philip made the varsity soccer team as a freshman under then Coach Kate Coules. According to current Coach, and father, Russell Philip, the Bucks graduated 16 players following her freshman season, which changed the entire time dynamic heading into her sophomore year.

“She was selected by her team to be one of the team captains during her sophomore year and led the team in goals with 18 for the season,” he said. “Her junior year was canceled due to COVID, but Philip and co-captain Katie DeVlaminck kept cheering on the team and recruiting for their senior year.”

As a captain, Philip has continued to encourage her teammates and worked to improve the program.

“Scotland was once again selected by her team as a captain this year and has pushed each player to work hard and give 100 percent all of the time,” Russell Philip said. “Scotland has been a huge asset for our team, and it will not be the same next year without her, but she has done a great job with our underclassmen and has helped elevate their games. We are very proud of her and this amazing accomplishment and her dedication to her team and to soccer.”

Monday’s match against Sturgis was the final one of the regular season. Buchanan will head to Constantine on Wednesday to open up play in the Division 3 District tournament. The match is scheduled to begin at 5 p.m.

The winner will face the winner of the Dowagiac-Berrien Springs match in the semifinal at 5 p.m. June 1.