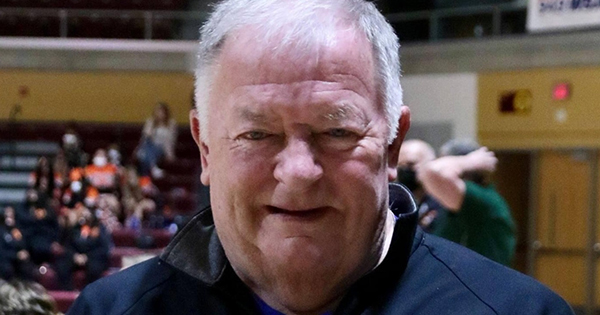 EAST LANSING — A staple of Michigan High School Athletic Association postseason track and field events for more than three decades, Grand Rapids’ Lewis Clingman continues to serve as an easily recognizable host of regionals and finals in that sport for teams from all over the Lower Peninsula each spring.

But his tireless service to school sports stretches across the entire school year and is rooted in 53 years as an MHSAA-registered game official, and those contributions are being celebrated with his selection for this year’s MHSAA Vern L. Norris Award.

The Norris Award is presented annually to a veteran official who has been active in a local officials association, has mentored other officials, and has been involved in officials’ education. It is named for Vern L. Norris, who served as executive director of the MHSAA from 1978-86 and was well-respected by officials on the state and national levels.

Clingman was to be honored with his Norris Award this month at the MHSAA’s 41st Officials’ Awards anx Alumni Banquet. However, the banquet was canceled for the second-straight year due to safety concerns because of COVID-19. Instead, he will accept his award as part of a virtual banquet published on the MHSAA website and social media feeds later this spring.

But that just scratches the surface of his many contributions. He is noted by many as a mentor – 2018 Norris Award honoree Jill Baker-Cooley that year specifically recognized Clingman among those who assisted her in getting started in the avocation. He has also been a catalyst of the MHSAA Lower Peninsula Track and Field Finals’ two-decade run in the Grand Rapids area. As a meet manager, he continues to schedule and organize officials for all four locations of the season-ending series.

Clingman also has served more than 40 years as an administrator, teacher and coach. He began his career at Holy Trinity Catholic School in Comstock Park, serving as middle school athletic director and basketball coach while also coaching football and track at Comstock Park High School. He served as head boys basketball and track coach and football assistant at Grand Rapids Kenowa Hills during the second half of the 1970s and after also serving as head basketball coach for five seasons at St. Joseph’s Prep in Grand Rapids.

He moved on to serve as athletic director at East Grand Rapids High School, then after a brief stint in the business world began a 20-year tenure teaching middle school for Grand Rapids Public Schools before retiring from GRPS in 2011. During that time, he became the spring event manager at Houseman Field, where at its peak, he hosted a combined nine high school and college track meets per week. He also, during his time at GRPS, served as an assistant coach in football, basketball and track at Grand Rapids Catholic Central. He joined the staff at Catholic Central seven years ago and continues to serve as event manager and assistant to the athletic director.

Clingman was added to the Grand Rapids Catholic Central Wall of Honor in 2016 and has received a GRPS service award.

“Lew has been someone who has given tirelessly, most of all of his time, over the years to really benefit not just officiating but school sports as a whole,” said MHSAA Executive Director Mark Uyl. “The work Lew has done, specifically recruiting and training track & field officials — providing for a sport we don’t think of very often as having those needs – and the work he’s done with ATOM has just been incredible. There’s been nobody more important to the track & field and cross country officiating community than Lew Clingman.”

Clingman graduated from Grand Rapids Catholic Central in 1965 and with bachelor’s degrees in history, physical education and English from Aquinas College in 1969. He earned a master’s in secondary administration from Michigan State University in 1978.

In addition to his continued service to Catholic Central, Clingman serves on the Aquinas Hall of Fame Committee and Alumni Association board and on the Grand Rapids Public Schools committee for Houseman Field renovation. He also serves as an official for local Special Olympics events.

Clingman and his wife Cindy have been married 52 years. They have four children, 13 grandchildren and one great-grandchild.