NILES — A pair of siblings have been named first-team All-State by the Basketball Coaches Association of Michigan.

Senior Logan Carson and his sister, sophomore Faith Carson, were both named BCAM’s Best. The pair helped their respective teams enjoy a successful season on the court.

Logan Carson, who was third in southwest Michigan with a scoring average of 17.1, helped lead the Bucks to the Division 2 District championship match. Buchanan dropped a hard-fought 57-54 decision to Lakeshore. 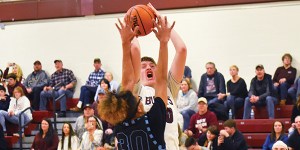 Faith Carson, who finished second in area in scoring with an average of 15.3, helped lead the Bucks to a 20-1 record and a Division 2 District title. Edwardsburg defeated Buchanan in the regional semifinals.

Carson was the lone player from the Leader Publications coverage area to be named BCAM’S Best.

In Division 3, Brandywine freshman Ellie Knapp, who led southwest Michigan in scoring with an average of 15.9, was an honorable mention pick in Division 3. No other players were named to the squad.

Five of the six teams that Leader Publications covers earned Academic All-State, led by Niles with a GPA of 3.700.

Each team is allowed to select one player who most exemplifies putting team before self, teamwork, commitment, service and sacrifice.

Buchanan’s Levi Zelmer was the lone boy to be honored.

Outstanding Senior Student-Athlete Awards were given to: