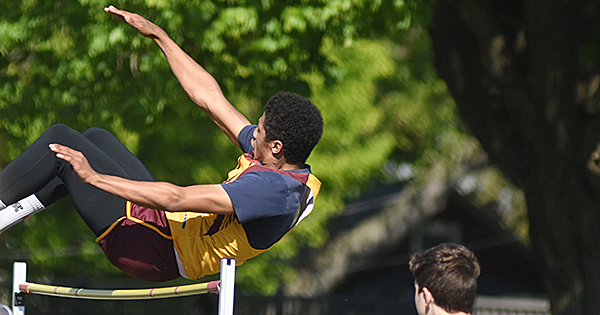 Byrd won the high jump with a height of 6-feet. Byrd was also part of the Bobcats’ fourth-place 800-meter relay team, consisting of Gavin Schoff, Michael Palmer and Bryce Taberski. That unit posted a time of 1:37.66 to help Brandywine finish 10th place overall.

Bryd also placed fifth in the long jump with a leap of 18-1.5. The Bobcats’ 3,200-meter relay team finished fifth with a time of 9:30.99. That squad was made up of Micah Colby, Mason Young, Robert Hartz and Taberski.

The Bucks also took second in the 400-meter relay with a time of 46.43. The team consisted of Johnny Rager, Ty Scurlock, Justin Taylor and David Twum. Scurlock also took fifth in the 100-meters with a time of 11.72.

Jake Zelmer had a third-place finish in the long jump with a distance of 19-1.5. He was third in the high jump with a height of 5-8.

The Bucks also had a fifth-place finish in the 1,600-meter relay with the team of Luke Sherwood, Graham, Jackson Starnes and Britian Philip. They finished with a time of 3:49.52. Draven Hirsh was fifth in the pole vault with a height of 10-3.

Centreville was the team champion with 91.5 points. Lawton finished second with 79 and Schoolcraft third with 77.5.

For the girls, Lauren Strefling, of Buchanan, won the long jump regional championship with a distance of 15-7.5.

Brandywine had a pair of top five finishes with Allison Lauri placing fourth in the 3,200-meters with a time of 13:15.86, and the Bobcats’ 400-meter relay team of Allison Fedore, Ericka Bergenham, Jaelyn Franks and Madison Franks finishing fifth with a time of 55.18.

Kalamazoo Christian edged arch rival Kalamazoo Hackett 126.5-125 for the regional championship. The Rangers finished with 83 points, while Marcellus was fourth (82) and Decatur fifth (59.5).

Jamison was also a member of the Rangers third-place 800-meter relay team, consisting of Grissom, Steven Christopher and Cole Millirans. That united finished with a time of 1:36.83.

Jamison and Grissom, along with Robert Ward and Millirans, teamed up to finish second in the 1,600-meter relay team that posted a time of 3:43.05.

Katherine Gregory finished third in the high jump with a height of 4-10.

Gobles was the regional champion with 117.5 points. Marcellus was the runner-up with 105. Cassopolis finished eighth and Decatur 13th.