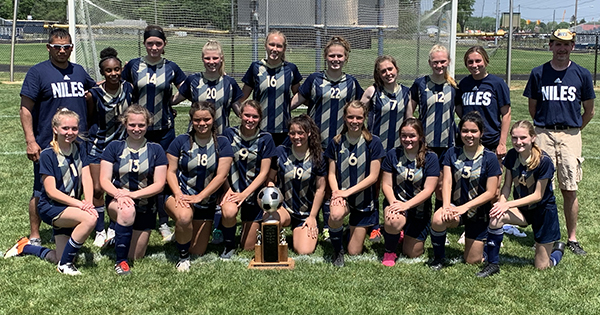 The Vikings defeated Buchanan 5-1 to claim the championship. Niles also defeated the Bucks 5-1 in 2019, the last time the tournament was held. There was no VanDenBerg Invitational in 2020 due to the spring sports season being canceled due to COVID-19.

Niles advances to the championship match with a 3-0 win over Berrien Springs, who replaced Cassopolis in the tournament after the Rangers did not field a girls soccer team this season.

Buchanan moved into the finals with a 3-1 win over Brandywine. Niles defeated the Bobcats 2-0 to win the 2018 tournament championship.

“The girls had a goal at the beginning, and that was to keep ‘big ugly,’ the trophy, at home,” said Niles Coach Abel Fonseca. “We came out with wanting to do better than the last game, and that was to finish better, along with winning more 50/50 balls. We did, and that led to the 5-1 victory.”

Senior Sydney Skarbek had a big day for the Vikings as she had a pair of goals in both the semifinals and finals. 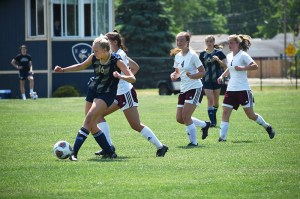 Skarbek got Niles rolling against Buchanan with a goal in the 11th minute. Skarbek would score the last goal of the opening half in the 28th minute to give the Vikings a 3-0 lead at halftime.

Mary Saylor had the other first-half goal for Niles. Saylor would open the second half with her second goal in the 34th minute.

Buchanan cut the lead to 4-1 early in the second half as Scotland Philip found the back of the net.

Niles responded quickly as Estefany Ramirez scored in the 45th minute to complete the scoring.

Against Berrien Springs, Kamryn Patterson opened the scoring in the 15th minute. Skarbek’s goals would come in the 21st and 34th minutes.

“The girls started slow, but found a way to move the ball around to create plenty of chances,” Fonseca said. “We played as a team with everyone working together. We had chances we need to finish when we have them. But all-in-all, we are meshing better as a team.

Riggenbach also had five saves against the Shamrocks.

Niles will wrap up the regular season by hosting former SMAC foe Kalamazoo Central at 5 p.m. The Vikings will then travel to Stevensville to face Lakeshore in the opening round of the Division 2 Districts.

Brandywine goes 1-1 in final tune up before districts

NILES — It was a tale of two games for the Brandywine girls soccer team. The Bobcats lost to Buchanan... read more