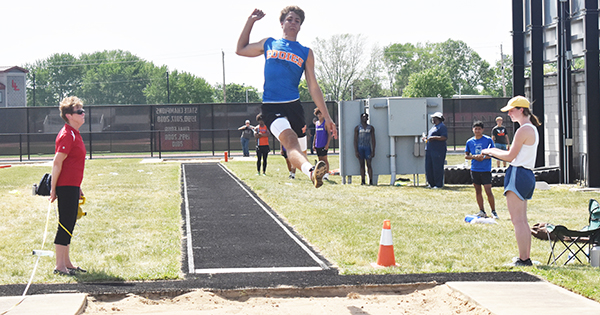 The Edwardsburg junior broke his school records in both high and long jump to help propel the Eddies to the Division 2 regional title Friday at Lakeshore High School.

The Eddies scored 101 points to hold off Berrien Springs, which finished second with a score of 91.5. Niles placed 14th with two points, while Dowagiac was unable to tally a single point.

The Edwardsburg girls placed eighth with a score of 42 and Niles 13th with 22 and Dowagiac 14th with five.

“It’s a pretty good feeling,” Stowasser said. “It’s perfect out here today, yeah, so I had big plans I was able to accomplish.”

Stowasser earned a regional title in the high jump with a leap of 6-10, breaking the school record of 6-9 he set earlier this month. An attempt was made to clear 7-feet, but he was not quite able to make it.

“It’s been a pretty nice day out,” Stowasser said. “I’ve just been relaxing and not really thinking too much about it, so when I got up there, I was pretty pumped up and ready to go.”

Stowasser followed up his record-breaking high jump with a school-record long jump of 22-6 to win the regional championship in the event, breaking his own school record jump of 21-11 in the process.

“I just focused on my speed running up and I jumped out the board,” he said. “I jumped up and it just carried me out.”

Stowasser attributes his success with jumps to his mental state prior to jumping.

“For high jumping,  when I’m about to jump, I load up, and then I jump,” he said. “I just fling mybackwardkwards. When I’m in the air, I’m not really thinking about anything and it just carries out from the jump. For the long jump, I’m just sprinting up and focusing on that penultimate step. I just carry my body up in the air and it just carries over from the sprint to the board.”

Stowasser and his teammates will be gearing up for the Division 2 state meet June 5 at Zeeland. Stowasser will enter the meet as the state’s top-ranked high jumper by two inches and the second-ranked long jumper.

“I have to keep working on it,” he said. “I can’t let my guard down. For the state meet, I just have to attack it like I have been and keep doing what I’ve been doing and it should just carry on. My goal is to win both events.”