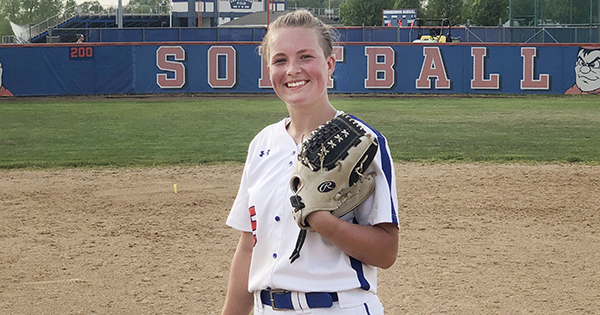 Edwardsburg’s Emma Denison struck out 13 and did not walk a batter in pitching a perfect game against Paw Paw Friday. (Submitted photo0

After the Eddies (20-8) had won the opening game from the Red Wolves 11-1 in XX innings, Denison took to the circle and mowed down the entire Paw Paw lineup for seven consecutive innings.

Denison struck out 13 and did not walk a single batter, while her teammates did not make an error in the field to produce the perfect game.

“That is quite a stat line,” said Edwardsburg Coach Dean Dixon. “Twenty-one up and 21 down.”

The Eddies scored all the runs they need with a pair in the bottom of the first, but added a run in the second, two more in the third and three in the fifth to account for their scoring.

Edwardsburg finished the game with eight runs on 11 hits, including two each by Samantha Baker, Alyssa Gearhart and Haley Masten. Baker had a pair of doubles, while Gearhart and Masten also finished with doubles. Masten drove in a team-high four runs.

Denison helped her own cause by doubling and driving in a run.

In the opener, Edwardsburg scored five runs in the first and never looked back. The Eddies completed their scoring with a four-run third inning and two more in the fourth. The game ended after five inning due to the 10-run rule.

Hannah Hartline picked up the win as she did not allow an earned run on one hit with three strikeouts.

Edwardsburg had 13 hits in the first game, led by Caitlin Tighe, who was 3-for-3 with a double, a triple and a pair of RBIs. Lindsey Dalenberg, Denison, Masten and Averie Markel all had two hits. Both of Denison’s were doubles. Masten and Abby Bossler both drove in a pair of runs.

Edwardsburg returns to action Wednesday as it hosts Mattawan in a non-conference contest at 4 p.m.

PHOTO GALLERY: The week in pictures

NILES — As teams continue to jockey for position in division and conference races, rivals started to square off this... read more