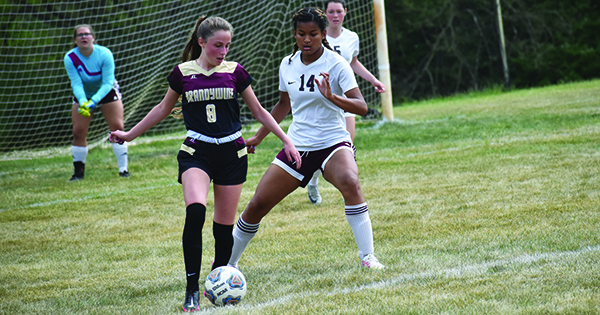 Brandywine’s Olivia Laurita (8) tries to get past Buchanan’s Alexa Burns (14) during the opening round of the VanDenBerg Invitational Saturday. (Leader photo/MAXWELL HARDEN)

Brandywine goes 1-1 in final tune up before districts

NILES — It was a tale of two games for the Brandywine girls soccer team.

The Bobcats lost to Buchanan 3-1 before rebounding to edge Berrien Springs 2-1 in VanDenBerg Tournament play Saturday at Brandywine High School.

Brandywine was down several key players due to injury and prom, including its starting goalkeeper and defensive midfielders. The Bobcats fell into a 3-0 hole against the Bucks before a late goal by Megan Wieger put the team on the board.

Adams was impressed with the way his team defended despite missing key defenders.

“Their No. 9 scored a lot on us in the last game,” he said. “We tried to slow her down and we did a decent job at that. Bryelle Martinez marked her for a little bit and Allison Fedore as well.”

In game two, Brandywine found itself down 1-0 at halftime before two second-half goals from Karla Avina-Rios gave the Bobcats a lead they would not relinquish.

“She asked me what she could do to improve in the first half,” Adams said. “She would bring the ball up, but she was not aggressive, she was not attacking. I told her to go ahead and turn the corner and make one to the goal and she did that for that first goal. She knows she’s got the speed. That’s why we play her on that wing, to carry that ball up the side.”

“It’s definitely a good way to finish and prep for that,” he said. “We have a couple of practice days that are definitely going to be hot. Nobody’s gonna want to be there but that at least puts a smile on their face. Three Rivers is going to be a tough team so we have to come out with everything we got.”