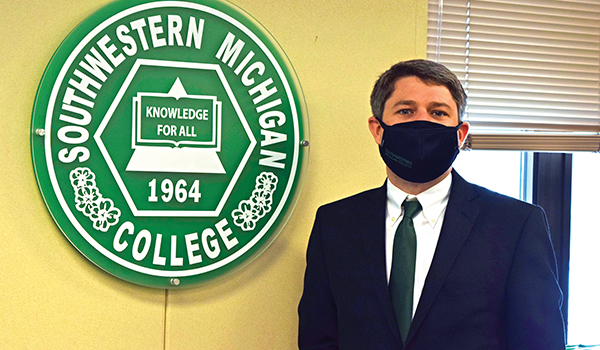 DOWAGIAC — Exciting things are happening at Southwestern Michigan College, and the Dowagiac Rotary Club heard all about it from the man in charge.

Joining the meeting via Zoom as this week’s special guest was SMC President Joe Odenwald, who discussed a variety of topics, including the college’s plan to revive four intercollegiate sports for fall 2022: men’s and women’s basketball, women’s volleyball and men’s wrestling.

The sports will join cross country in the newly-formed athletic department.

“This was a decision that we didn’t come to lightly,” he said. “it’s been about a six-month process. We added cross country last year, and we’ve had an incredible response to that, including alumni gifts and the fact that we’re getting some kids locally that we wouldn’t be getting otherwise.”

In addition to the four announced sports, Odenwald said the school will be creating a competitive dance team, and would like to establish a pep band to bolster the athletics experience.

The newly-announced sports programs will need a proper facility to practice and perform in and the school has big plans in store. SMC announced a $2 million renovation project for the existing Charles O. Zollar Building, which will include the replacement of the original gymnasium floor, the replacement of the original bleachers with a new system that will meet current Americans with Disabilities Act requirements and more.

Odenwald believes that an athletics program will serve to boost school spirit as well as enrollment numbers. Since the last recession, the college’s enrollment went from 3,000 students to less than 1,800. The college hopes to have 2,000 students enrolled for fall 2021 and 2,200 by the fall of next year.

“We’re desperately trying to get back to 2,000,” Odenwald said. “To really have a college that I think would be healthy and that can maintain long-term our infrastructure, our people and everything else long-term, we need to be a college of about 2500 students. Historically, if you look at when we were at our best, we had about 2,500 learners, and I’d really love to see us push that to between 2,500 and 3,000.”

Odenwald said the college began presenting each new student with $500 scholarships as a means to entice students to enroll.

“That’s a cost to us but we’re trying,” he said. “We believe that we get them here, get them in, help them get their financial aid done and demonstrate the affordability and I think in the long term it’ll pay for itself.”

The COVID-19 pandemic impacted life at SMC in all facets but Odenwald was proud of the way the students and faculty adapted and overcame it. The college’s enrollment was down 17 percent, per Odenwald, but the college was able to limit the virus’ spread spring semester.

More than 50 percent of SMC’S spring courses were face-to-face while offering hybrid and online courses.

“Everybody worked hard,” Odenwald said. “The students deserve an incredible amount of credit for abiding by the protocols. The biggest challenges we had with the virus were family relationships and those kinds of things. I was very proud of the fact we had graduation in person last weekend.”