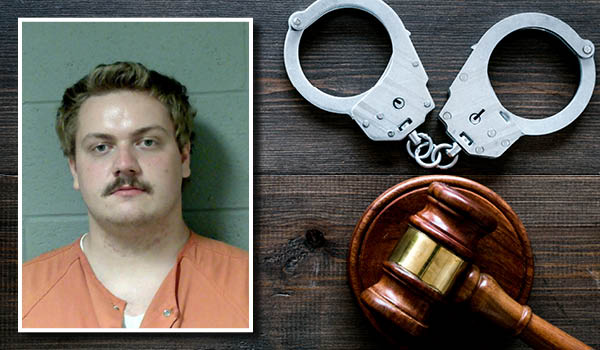 CASSOPOLIS – A former Niles resident was sentenced in Cass County Circuit Court Friday to probation and must register as a sex offender after contacting a California teen online.

Brennon Allen-Lee Mann, 20, of Otsego, formerly of Barron Lake Road in Niles, pleaded guilty to accosting a child for immoral purposes and was sentenced to two years’ probation, credit for two days in jail already served, registering as a sex offender and paying $2,328 in fines and costs.

The incident occurred in 2019 when he contacted a California girl online, sharing nude photos and sexually explicit conversations. The victim contacted Mann’s girlfriend in Michigan who then contacted police.

“If I could go back, I’d change what I did and make a better decision.”

The victim’s mother spoke before the sentencing from California. She said that her daughter had suffered emotional damage and has anxiety and Post Traumatic Stress Disorder. She said her daughter is
in counseling.

Defense attorney Robert Drake noted that Mann had no prior record and that there was no actual attempt to meet the victim. He added that the investigation started after the victim was engaging in similar behavior with other people around the country.

In another sentencing, an Edwardsburg resident was sentenced to probation and community service after being sentenced for third offense drunk driving.

The incident occurred April 28, 2019, when police found his car stopped in the road at Five Points Road and Starbrick in Edwardsburg and found him slumped over the wheel. He later became combative with police in the ambulance. His blood alcohol level was .348, more than four times the legal limit.

Judge Herman noted that it was Beadle’s fourth drunk driving and that he faces a prison term if he violates his probation and drinks again. “Your drinking and driving stops today,” he said. “It’s one thing to drink yourself to death at home, it’s different if you’re on the road.”

Also Friday, a Buchanan woman was sentenced to probation.

Amanda Ruth Johnson, 38, of Fulton Street in Buchanan, pleaded guilty to use of meth and use of heroin and was sentenced to 10 months’ probation, credit for 19 days served, six months license suspension and $1,525 in fines and costs.

The incident occurred Nov. 17, 2020, at the Barnswallow apartments on Hospital Street in Cassopolis.

Dowagiac woman to compete in ‘Jeopardy!’ Tournament of Champions semifinals

DOWAGIAC — A Dowagiac woman is entering the semifinals of a contest meant to showcase the best of the best... read more