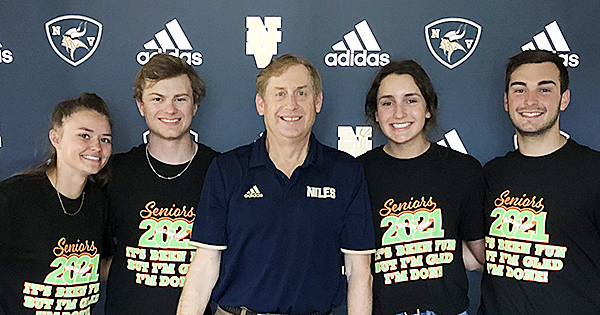 NILES — Even a pandemic could not stop Niles High School from handing out its yearly awards.

The awards, which are voted on by the Viking coaches, include the Joseph Whitwam Sportsmanship Award and the Ed Weede Most Valuable Player Award.

Jeff Upton will be retiring as the Niles athletic director. However, he will stay on through Labor Day to assist the new AD in getting settled in.

“Shelley and I believe by giving scholarships to the annual Ed Weede and Joseph Whitwam winners, it is a gift that adds to the importance of the accomplishment,” Jeff Upton said. “For those of you who don’t know my wonderful wife, she was a three-sport athlete in both Texas and Colorado. She was regional champion in tennis singles for East Texas [at the time, that was as far as you could progress as a freshman athlete], and her Colorado basketball team made it to the final four. She was also a cheerleader and softball player in high school, while graduating tops in her class.

“I have always believed in good sportsmanship and am honored to up the ante with the scholarship for the Joseph Whitwam award winners.”

Vota is a four-year, three-sport athlete for the Vikings. He was a four-year starter in both soccer and baseball. He also was a kicker for the Niles football team. Vota has played baseball at the national and regional youth levels and will continue his playing career in baseball at Butler University.

The Whitwam Award goes to Mason Waggoner and Bailey Bickel.

Waggoner played baseball and football for the Vikings. He was also excelled in the classroom and is a leader off the field as well as on it, one of his coaches said in nominating him for the award.

Also nominated for the award were Vota, Dylan Snyder, McKeel and Lydon.

Bickel played volleyball, basketball and softball for Niles. She played all three sports for four years. Bickel is a role model, according to her coaches, who plays with energy, enthusiasm and a great attitude. She has learned the art of taking something that went wrong and turn it into a positive. She always offers her smile to everyone, coaches said.