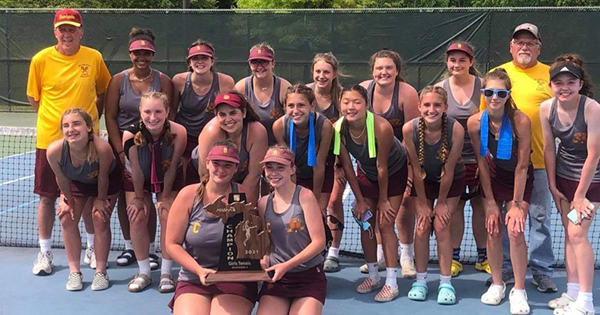 The Bobcats, who edged Buchanan 19-15, advance to the state finals, which will be hosted June 4-5 at Holland Christian and Holland West Ottawa high schools. Schoolcraft also qualified with 10 points.

Brandywine was 8-0 in the opening round of matches and then went 6-2 in the semifinals and 5-1 in championship matches.

When Brandywine won the regional championship in 2019, the Bobcats finished fourth at the state finals, which gave them back-to-back top 10 finishes at the finals meet. There were no spring sports in 2020 due to COVID-19.

“This team is special because of the mental toughness the kids displayed to claim conference and regional titles under the COVID conditions and protocols,” Brandywine Coach Joe Marizita said. “They worked hard all year, and Coach [Rich] Robbins and myself have been pleasantly surprised by their accomplishments, and they are not done yet. Just a great group to work with.”

Brandywine went 14-1 overall this season and undefeated in the BCS Athletic Conference to win its eighth consecutive league championship. No other team in the BCS has won a girls tennis title other than the Bobcats, who have yet to drop a dual match in conference play.

Winning regional titles for Brandywine was Jessica Williamson, who defeated South Haven’s Jessica Ford in the finals, 6-1 and 6-0. Ford advances to the state finals at a finalist at No. 1 singles. Williamson is just the third Brandywine player to win a regional championship at No. 1 singles. The other was Amy Konopinski in 2007, and Megan Schmidt in 2019.

Katie Stratton and Emma Hinsey defeated Kade Roberts and Mehkenna Olinghouse, of Buchanan, 6-3 and 6-1 to win the No. 1 flight championship. Abbie Hubbard and Morgan Horvath were champions at No. 2 doubles with their victory over Riley Capron and Norah Kutemeier, of Buchanan, 6-1 and 6-2.

The team of Tressa Hullinger and Ellie Knapp defeated Kaylee Marcks and Adriana Nimtz, of New Buffalo/Bridgman/Lake Michigan College, 6-0 and 6-0 to bring home the No. 3 doubles crown. Meg Pomranka and Grace Hinsey were champions at No. 4 doubles with their win over Buchanan’s Isabella Bryans and Sadie Holloway, 6-0 and 6-2.

The Bucks’ Claire Shelton was the champion at No. 3 singles as she defeated Morgan Beehler, of Schoolcraft, 6-1 and 6-1. Buchanan’s Olivia Paturalski won the No. 4 singles championship over Brandywine’s Cortney Bates, who was forced to retire.

Katie Schau, of Buchanan, finished second at No. 2 singles as she was defeated by Schoolcraft’s Maya Pearce 7-5 and 6-4.