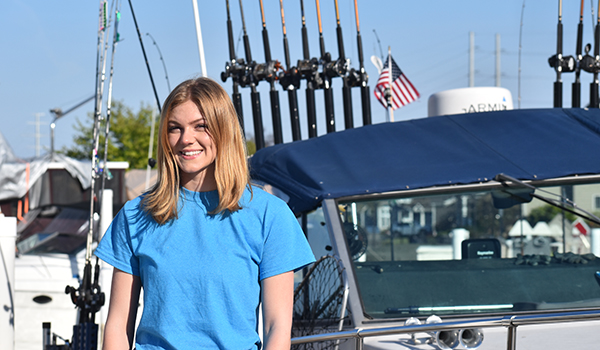 NILES – Navigating a ship on open water might seem intimidating to many, but not to Gabriella Inman.

During the 2020-2021 Honors Assembly for Brandywine High School seniors hosted on Tuesday, May 11, graduating senior Inman was presented with her Master Captain’s distinction and was recognized during the ceremony for her hard work. She was also recognized as the first woman to be accepted into the marine service technology program at Great Lakes Boat Building School in Cedarville, Michigan.

“The president [of the school] was the one who informed me that I was the first woman in the marine mechanic part of the program,” Inman said. “It’s a little intimidating. I have a lot to learn.”

She already achieved quite a bit prior to her acceptance into the school.

According to the U.S. Department of Homeland Security United States Coast Guard Auxiliary, a Master license is required to operate inspected vessels. Inspected vessels are allowed to carry more than six passengers, according to its website.

For the Master Captain license, drug tests, CPR and first aid certification, as well as a U.S. Department of Homeland Security background check, are all prerequisites to be able to take the test for the license, in addition to hours spent on the water itself.

During the awards ceremony, Inman was awarded her Master Captain’s license, in addition to a scholarship from Elk River Marina.

Inman, whose parents, Pepper and Chris, both captains as well, has had boats in her life off and on.

“My dad had some boats when I was much too young to remember,” Inman said. “My oldest sister raced motocross, and after she was done with that, he always said he would get another boat. Then he did.”

She said the family spent a whole winter working on the boat, tearing it apart, rebuilding it and redoing the seats and the interior.

“As I was working with him, I started to like it more and more. We got the other two [boats], and one required a lot of work,” Inman said. “He can’t fit in the engine compartment as comfortable as I can. I fell in love with doing it, and spending time with my dad, was a big part.”

Her father, Chris, said Inman did the majority of the engine work on one of their boats.

“I have pictures of her covered, with her face all black from being in the bottom of the boat,” he said.

Together, Chris, Pepper, and Gabriella Inman run a business on one of their two boats – Our Leg-A-Sea Charters.

“We got into boating, and now that’s just become the family thing,” Pepper said.

Though the hired charters on Lake Michigan make for early mornings and late nights on the weekends, Inman enjoys her time both out on the water and with the people she gets to meet.

“It’s the best way to get out of the craziness that we live in,” Inman said. “We have so many restrictions with COVID-19, crazy people in society and just crowding. Just being on the boat – it’s just you. Chartering is just you and your clients. It’s honest people who just love to do what they’re doing. You get to see a side of people you don’t get to see in the public on a regular basis.”

She also credits her parents in helping her find her way to operating boats and into the engines. Pepper worked as a contractor and Chris worked in a machine shop as Inman grew up.

“Working on boats, it’s just fun to get down and dirty putting them together and understanding the mechanics of it,” Inman said. “Growing up with two parents who work in the trades, I didn’t know that’s what I wanted to do, but after I was exposed to it, it was [very clear].”