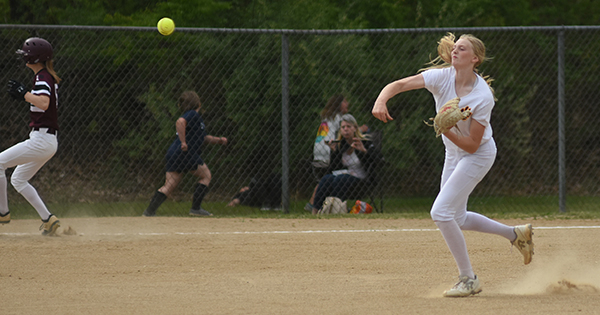 Kadence Brumitt, who had a solo home run for Brandywine, fires a ball across the infield against Buchanan Tuesday. (Leader photo/SCOTT NOVAK)

Buchanan makes adjustments to get past rival Brandywine

According to Bucks’ Coach Rachel Carlson, the Bobcats switched up their pitching, trying to catch her team off guard.

It did not quite work out how Brandywine wanted it, as Buchanan swept the Bobcats 18-1 and 18-5. The two wins gave the Bucks the Red Division crown.

“Brandywine tried to change up their pitchers on us, and we had to make adjustments. I thought we did that well,” Carlson said. “Our pitchers continue to throw the ball well, and we take pride in the defensive we are playing right now.” 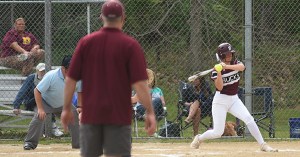 Conversely, the Bucks only allowed seven hits by Brandywine.

Sophia Lozmack, the winning pitcher, added a pair of doubles and drove in two runs. In the circle, she allowed just three hits with 12 strikeouts and a walk.

Offensively for the Bobcats, Kadence Brumitt, who took the loss, had a solo home run, while Chloe Parker added a double.

In the nightcap, Hannah Herman was 4-for-5 with three home runs and four RBIs for the Bucks. Alea Fisher was 4-for-6 with five RBIs. Buchanan also got three hits from Sophia Lozmack and Camille Lozmack.

Brumitt was 2-for-3 to lead the Bobcats, who also got a grand slam from Haley Scott.

Kara was the winning pitcher, as she allowed four hits and struck out six. Presley Gogley took the loss for Brandywine.

Carlson said that the team needs to continue working on the little thing,  as players begin the drive toward the upcoming district tournament. The Bucks drew Constantine for their opening game June 5.

“We have some things we would like to perfect, and we’re working daily at making ourselves better,” she said. “Our leaders are leading right now, which will play a big role as we move to the tournament. We like our district draw and are setting our sights on Constantine.”