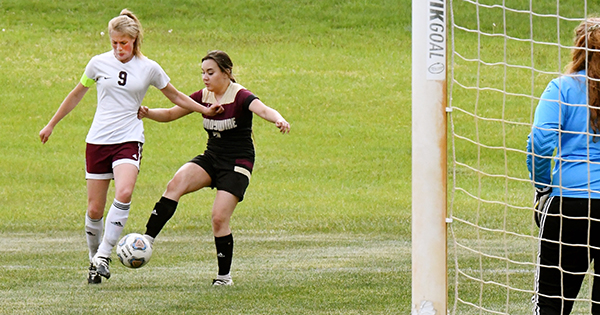 Also scoring goals for the Bucks were Alexa Burns, Hailey Jonatzke and Mia Struss. For Jonatzke and Struss, the goals were the first of the season.

“We changed our shape a little bit for this game and it seemed to give us a more offensive approach,” said Buchanan coach Russell Philip. “Our MVPs of the evening were our backline. Our defense didn’t quit and really had a great game. This is very new to soccer, and it has been a lot of fun to work with them and watch them grow and improve at each game. We’ve only got a few games left, but we are looking forward to a strong finish.”

The Vikings Chieftains were defeated by the Bulldogs in Wolverine Conference play 7-1 Monday.

Jessa Davis had the lone goal for the Chieftains.

“The girls took a long time to warm up tonight,” said Dowagiac Coach Chad Davis. “Otsego came out on fire scoring six goals in the first 20 minutes. We finally settled in and realized what they we’re doing and figured out how to stop the bleeding. The girl’s effort was much better in the second half. They work together and played extremely hard even though Otsego is a very talented team. I was proud of the effort the girls gave in the second half. We were still sleeping from the bus ride in the first half. I told the girls at least we can build on the second-half performance and get ready for Paw Paw and districts.”

Graci Tate and Steph DeMeulenaere scored the goals for the Bees.

Macey Laubach had the lone goal for the Eddies, who dropped a 4-1 Wolverine Conference decision to Three Rivers Monday.

Haley Pletcher had the assist for Edwardsburg, which dropped to 3-8 overall and 1-6 in league matches.