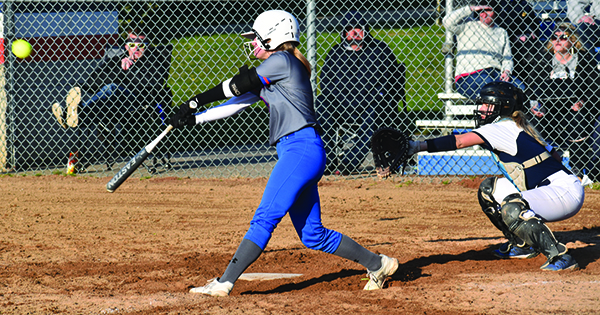 Hannah Hartline picked up a pair of wins, one as a starter and the other in relief.

Hartline picked up the win in relief of Averie Markel against Brandywine.

The Eddies had six hits against the Cavemen, including a home run by Caitlin Tighe.

In the New Prairie game, Edwardsburg finished with 10 hits.

The Eddies banged out 14 hits against the Bobcats, including a double and a home run from Emma Denison, the winning pitcher in the second game. Samantha Baker had a pair of doubles. Gearhart added a double.

Haley Scott, who was the losing pitcher for Brandywine, had a home run. Chloe Parker had a double.

Sophia Lozmack tossed a no-hitter with 16 strikeouts with one walk in the first game. Buchanan had 11 hits, led by Lozmack and Hannah Herman, both of whom had home runs. Hannah Tompkins added a double.

In the nightcap, Camille Lozmack tossed a no-hitter for the Bucks.

Macoy West tossed a one-hitter with 13 strikeouts and just one walk in the opener. Buchanan had 10 hits, including a double and a triple by West. Matthew Hoover added a double.

In the second game, Drew Glavin tossed a no-hitter with seven strikeouts.

Buchanan had 12 hits, all singles. Hoover was 3-for-4, while Jack Branch and Paul VanOverberghe were both 2-for-3. Cade Preissing drove in five runs.

The Edwardsburg baseball team swept a doubleheader from visiting Allegan in Wolverine Conference play. The Eddies won the opening game 13-3 and the nightcap 10-0.

The Eddies had 14 hits, including a double and a home run from Connor Ostrander and doubles by Landon Mikel and Robinson.

In the nightcap, Tabor Lock tossed a two-hitter with seven strikeouts. Ostrander worked one inning, striking out three.

Patrick Szlanfucht had a pair of doubles for the Eddies, who finished with 11 hits.

The Chieftains won the opening game 13-3, but dropped the nightcap 9-4.

Ben Clann picked up the victory for Dowagiac, as he scattered five hits in going the distance.

In the second game, Dowagiac was held to four hits.

The Brandywine Bobcats were 2-0 at the Kalamazoo Hackett tournament on Saturday.

Owen Hulett earned the victory for Brandywine with relief help from Hunter Heath.

The Bobcats had nine hits, including a pair of doubles from Jakob Luczkowski. Gabe Gouin and James Vaughn also had doubles.

The Bobcats had 12 hits, led by Kendall Chrismon and Hulett, both of whom had a pair of doubles. Carson Knapp added a double, while Gouin had a triple.

At the Lakeshore Quad, Niles split a pair of games.

Against the Bears, Chase Lotsbaich went the distance, giving up two runs on six hits.

The Vikings had eight hits, including doubles from Jadon Hainey and Drew Racht.

Against the Lancers, Hainey took the loss in relief of starter Racht. Gage Vota also took the hill for Niles.

The Vikings had five hits in the contest.