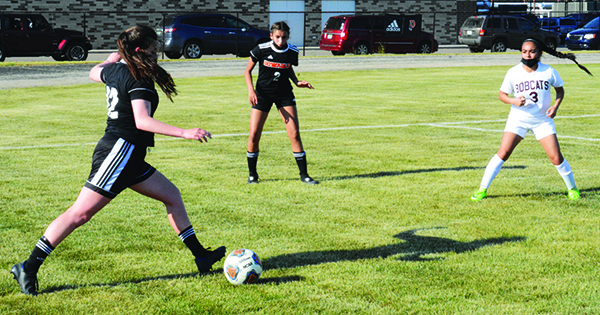 “Today was a really good day,” said Dowagiac Coach Chad Davis. “I thought we moved the ball really well. We played as a team. The girls practiced all day long yesterday, swinging the ball and attacking out of it, swinging back to defense, attacking forward, with multiple players playing multiple positions.”

“She was real hungry,” Davis said. “They were really hungry. We got a tough win the other day against Sturgis, and we didn’t move the ball, well. So that’s all we worked on.”

Martha Schaller tallied two goals, while Faith Green and Emma McCory each had one goal. Davis attributes the team’s strong second half to an emphasis on ball movement and Brandywine fatigue.

“I was in that same boat a few weeks ago,” Davis said. I understand exactly how this game is working this year, but I thought overall it was a great performance by the girls.”

Brandywine Coach Caleb Adams was proud of his team’s effort despite the loss.

“I thought we did well,” he said. Dowagiac is a big team. They always do well against us. They have speed and they have athletic ability. We stood in and played with them physically. We held them pretty well in the first half with our passing. Our trapping needs to be a little bit better, but our players know what they need to do, so that’s a plus. Where we are on the level mentally, we just need to bring up our physical play.”

While the Bobcats have struggled with numbers amid the pandemic, Adams has seen improvement from his team since the season began.

“It’s been a challenge to get games out there,” he said. “But every game we’re playing we’re playing well. A lot of the players have picked up a lot of individual talent and if they leave me with being better soccer players then I consider that a win no matter if our team has won anything or not. The coaching is going well. The players are still enjoying this sport and improving themselves, so that’s a bonus.”

DOWAGIAC — “I’m standing here today at only 18 years old as the first in my family to graduate from... read more