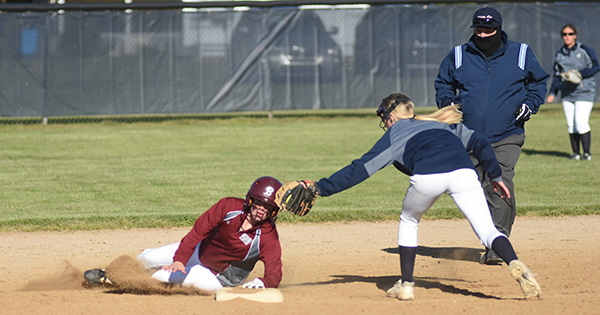 NILES — Offense was the name of the game as visiting Buchanan and Niles split a BCS Athletic Conference doubleheader at Vella Park Tuesday.

The Bucks banged out 14 hits in an 11-1 win over the Vikings in the opening game. Buchanan had two doubles and a triple in the contest.

Niles rebounded to win the nightcap 12-8 as the two teams combined for 20 hits, including seven extra-base hits.

The split left the Bucks with a 20-3 overall record, while the Vikings are now 15-9 on the season.

“I thought we had great at-bats in both games,” said Buchanan Coach Rachel Carlson. “We have been working on our quality at-bat goals, and that definitely was displayed by our team tonight. Our entire line up executed at the plate, and that was great to see. Unfortunately, we did not play as well defensively in the second game, which was very out of character for us. We let some things affect our play in the second game, and we will use that to learn and move forward from.”

Sophia Lozmack tossed a three-hitter with 12 strikeouts and two walks.

Mya Syson took the loss for the Vikings. Amira Lee had a double for Niles.

A five-run second inning helped the Vikings earn the split.

A walk and an error to open the second inning gave Niles the momentum. Singles by Chevelle Jaynes and Taylor Young were followed by two-double back-to-back doubles by Alexis Rauch and Syson.

The big inning allowed the Vikings to turn a 5-2 deficit into a two-run lead they would not relinquish.

Syson added a solo home run in the third inning to extend Niles’ lead to 8-5. Three more runs in the fourth broke open the contest.

“We did not come ready to play the first game,” said Niles Coach Dale Myer. “We made too many errors and gave them extra outs, and Buchanan took advantage of it. We were not very disciplined with our at-bats in the first game, but I give credit to them — Buchanan is a very good team up and down the line up. With very good pitching. The second game, we got it going with our at-bats and made some key defensive play. Besides a few errors, we played pretty well all around.”

Buchanan made one last run at the Vikings in the fifth inning as Lozmack hit a lead-off solo home run, and Tompkins added a two-run shot later in the inning.

The Vikings were able to get out of the inning without further damage to preserve the win on senior night.

Syson, who struck out seven to earn the victory, also added a pair of doubles to her home run. Rauch also had a double for the Vikings.

Herman had a double among the Bucks’ 10 hits.

DOWAGIAC —The Dowagiac Union Schools Board of Education honored the district’s April Students of the Month during its meeting Monday... read more