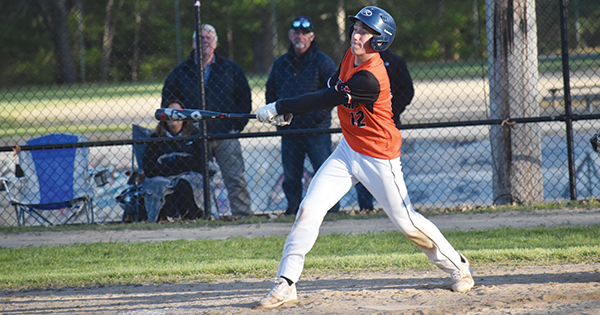 The Chieftains split their doubleheader with Three Rivers, falling 3-0 in game one and winning game two 8-4.

“We’re very pleased with how we played today,” said Dowagiac coach Keith Schreiber. “It’s been a struggle early on for us. We had some COVID issues, and we’re missing some guys and just really haven’t had a lot of time to practice together. We have struggled defensively early in the season and really struggled on offense as well, but we’re in a seven-game stretch now where we’ve pitched it pretty well, and we’re starting to pick up the ball.”

Dowagiac found tough sledding in game one against one of the state’s top pitchers in Three Rivers’ junior Gavin Bueter. Bueter pitched all seven innings, striking out 12 batters while giving up just three hits.

Kanyon Binns had two hits for Dowagiac, and Henry Weller added one. Binns struck out eight batters on the mound while giving up three earned runs in 6.2 innings.

The Chieftains rebounded in game two. Trailing 4-3 entering the fourth inning, Dowagiac outscored Three Rivers 5-0 in the frame to take control of the game and win.

Jordan Simpson led the Chieftains with two runs scored, two hits and an RBI, and Ethan Hannapel added two runs and two hits of his own. Cayden Dorman led the team with two RBIs.

Henry Weller earned the win on the mound, pitching seven innings and striking out one batter while giving up eight hits and two earned runs.

“In terms of getting balls and running the bases and everything, that second game was our best offensive game of the season,” Schreiber said. “That first game, we faced one of the best pitchers in the state, and I thought we had played decent against him. That first game was positive. We had a well-pitched game and for us. We’re definitely moving in the right direction.”

Schreiber was impressed with Simpson’s and Henry Weller’s play in game two.

“Jordan is an outfielder, and he’s just a little scrapper, lead-off guy,” Schreiber said. “He did his job tonight leading off and getting on base for us all night. Henry pitched that second game for us, but he’s been good at shortstop for us all year.”