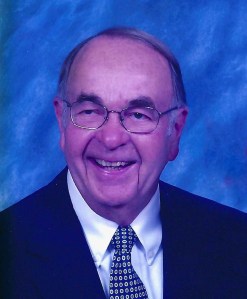 Born in Fort Worth, Texas on Dec. 30, 1928, to Henry and Zayda Toler, he moved as an infant to Kansas City, Missouri, where he resided intermittently until 1951. He participated in many activities at East High School, and was an Eagle Scout. Following high school graduation in 1946, he enlisted in the U.S. Army and became a World War II veteran, having served in the First Cavalry Division’s occupation forces in Japan until late December 1947.

He attended the University of Missouri, Columbia, from January 1948 until his graduation in June 1951 with a bachelor of journalism degree in advertising. He was president of Tau Kappa Epsilon fraternity, a member of Alpha Delta Sigma professional fraternity and was active in other campus events. While at MU, he met his future wife, Barbara Schuyler, at Stephens College in Columbia, from where she graduated in 1951. They were married in Wilmette, Illinois in April 1952 and lived in the Chicago area until 1959.

After employment as an advertising copywriter at Montgomery Ward in Chicago, Doug entered the industrial advertising field, which led into industrial marketing and sales management positions at several international companies in the Chicago area and Niles, Michigan. During his 40[year residence in Niles, he was a director of the local chapters of the chamber of commerce, United Way, YMCA, American Red Cross and American Marketing Association. He was an elder in the First Presbyterian Church and a member of Orchard Hills Country Club. His three children all Attended Niles Public Schools through high school.

Following retirement, he and his wife moved to Knollwood Village in Southern Pines, North Carolina in December 1999. He served two years as president of the homeowners’ association and volunteered in other village activities. He was a certified Red Cross CPR instructor for 12 years, volunteered in the cardiac rehab program at First Health’s Fitness Center and the Moore County Free Care Clinic and participated as a court advocate for children in the local Guardian ad Litem program. He was a member of Brownson Presbyterian Church and sang in the Golf Capital Chorus. He enjoyed golf, cycling, platform tennis, bridge and gardening.

Cremation has taken place, and a private service will be held at a future time.

In lieu of flowers, memorial contributions can be made to the AALS Society in memory of Doug’s sister, Betty (Toler) Eggleson, or to the Moore County Chapter of the American Red Cross.