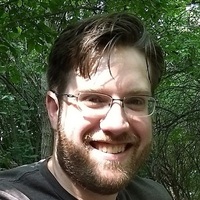 On May 1, 2021, Marcus Florey passed away due to natural causes. He was surrounded by family at the time of his passing.

Marcus loved his family and showed it with his big heart full of generosity and warmth, and a witty sense of humor that made everyone around him laugh. From playing on the local softball team with his brother, sister, and sister-in-law; to enjoying a loving home life with his love of nine years, Amanda Fox, and their four kitty girls – Charlie, Scarlett, Saffron, and Steven, who was by his side at his final moments – Marcus had an unlimited love for the people he cared about.  Even beyond his family, he acted as a “big brother” to many, and was always eager to lend his knowledge and guidance whenever called upon.

Marcus was uniquely talented and knowledgeable: he built his own computers, created figures with his 3D printer, enjoyed working on cars and home do-it-yourself projects, and was a Viking at heart with his love of craft beer. He was an avid reader who constantly researched various interests and projects he wanted to undertake. He had meticulous attention to detail and never steered away from any challenges. Video games, board games, and D&D with his friends and family were his passion and the driving force of his life.

A viewing took place at Hoven Funeral Home on Saturday, May 8, 2021. Online condolences may be made at hovenfunerals.com.