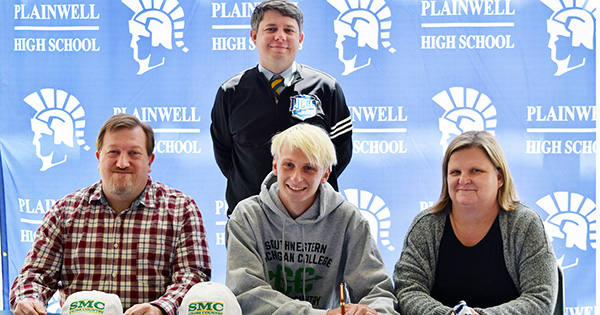 Plainwell’s Alex Blanton is flanked at the signing with SMC cross country by his parents, Allen and Gretchen Blanton, and his coach, Scott Evans. (Submitted photo)

Plainwell’s Blanton to run at SMC

Blanton was flanked at the signing in the Performing Arts Center by his parents, Allen and Gretchen Blanton, and his coach, Scott Evans, who suggested he look into SMC.

Blanton started running in seventh grade as a miler on the track team. He grew up in Richardson, Texas, a Dallas suburb, until eighth grade, when his family moved to Allegan County, and he started cross country. He has a younger brother in seventh grade.

Blanton turned in his 5K personal best of 18:16 at regionals junior year. In track, he runs the 400 and 800 meters for Plainwell, which, like Dowagiac and Edwardsburg, belongs to the Wolverine Conference.

He also participates on the Trojans’ swim team and works as a lifeguard. In fact, he saved a man’s life who was having a heart attack.

He played soccer until he gave it up to focus on cross country.

Running helps Blanton feel free, gets him out of his head and relaxes him, as he also likes to strategize during races, which can lead to overthinking.

Running will give him ample time to mull his academic options, as he is interested in pursuing one of three distinct areas — teaching, forestry to become a park ranger “because I like being outside” or physical therapy.

Work occupies his spare time. For the past year he has been employed at Plainwell’s Meijer as a courtesy clerk, which includes corralling shopping carts.

“I’m going to work at Meijer and the pool and run this summer,” Blanton said. “I’m going to try doing an easy five miles on Mondays and Fridays. Then I’ll run to my grandparents’ in Gun Lake, which is about 13 miles, for my long run on Wednesdays. Tuesdays and Thursdays will be my workout days. I’ll try to do mile repeats of some sort or a tempo run.”

Edwardsburg — After struggling in lopsided losses the past few weeks, the Edwardsburg girls soccer team was ready to notch... read more