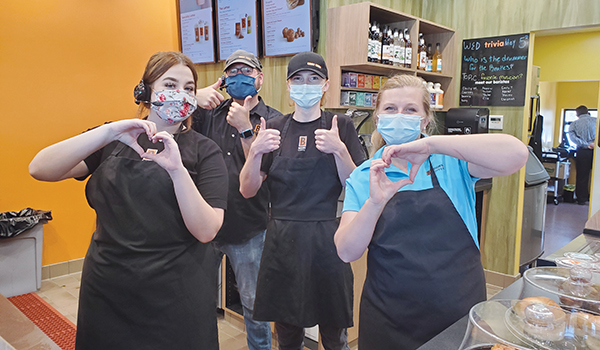 EDWARDSBURG — A new coffee shop is serving up smiles in Edwardsburg.

Tuesday, a new Biggby Coffee location opened at 69821 M-62, Edwardsburg. The coffee franchise, known for whimsical lattes such as the Butter Bear or Carmel Marvel, has been in the works since August 2020. 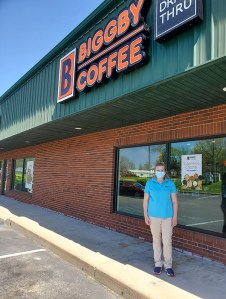 “It feels great to be open,” said franchise owner Karmen Rimes. “We are really excited.”

Biggby Coffee is a Michigan-based company founded in 1995 in East Lansing. By 1999, the company began franchising, and as of 2019, more than 230 Biggby Coffee locations were operational within the U.S.

Rimes said she was inspired to bring a Biggby location to her home of Edwardsburg after seeing a need in the community.

“On any given day, my family — and we have four kids — would be driving 20 minutes to get a cup of coffee,” she said. “There was a need, and Biggby is all about community, so I thought it was a great fit.”

Already, Rimes sees that need fulfilled. In her first few days of being open, she said she had customers non-stop, and, at some points, her drive-thru has weaved through the parking lot and into the street.

“There’s been a great response,” Rimes said. “The community is just as excited as we are.”

As the business continues to grow, Rimes said she wants to ensure the new Biggby becomes a faithful member of the community — something she said she started before opening day by using all local designers and contractors. In Edwardsburg, the Rimes and her husband, Christopher, used sign services from Signworks and design services from Carmi Design Group. For construction services, the family used Astrong Construction based in Niles.

“We made it our mission to do everything local,” she said. “We had an opportunity to outsource things, but I think it is great to have them as close to home as possible. You are supporting the community in so many different ways when you do that.”

Rimes continued to support the community on opening day when the new Biggby location hosted a fundraiser for a local family whose daughter is undergoing cancer treatment.

“We just hope to grow and continue to support the community,” Rimes said. “I’m hoping to bring more jobs to the community and to just bring fun. Everything about Biggby is really fun, and we always want you to leave in a better mood than when you came in. I think that is really awesome.”