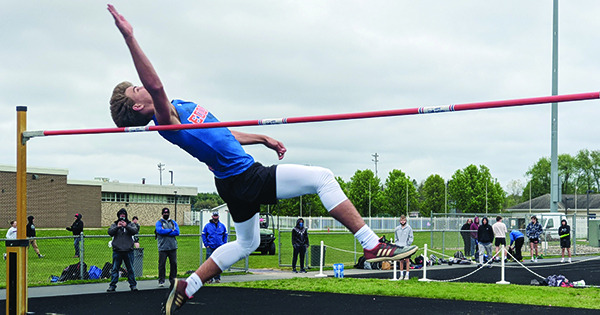 EDWARDSBURG — Edwardsburg’s Luke Stowasser lives up to the phrase “spring into action” every time he steps on the track.

The junior was the star of Tuesday’s Wolverine Conference tri-meet victories against Sturgis and Paw Paw, winning the long jump with a school-record leap of 21-foot-11 and the high jump with a jump of 6-foot-8.

The girls track team also picked up wins over the Trojans and Red Wolves.

“I started a little slow,” Stowasser said. “I started to warm up a little bit and got the win, but I’m definitely going to beat 6-10 this year.”

Stowasser tried to break his own school record high jump of 6-9 set at last week’s Eddies Invitational by attempting 6-10 but came up just short. As of Tuesday, Stowasser’s school-record leap in high jump ranks first in the state, and he is ranked third in the long jump.

“Coming into the season this year, we knew that he had some potential,” said Edwardsburg coach Jon Pryor. “He’s really been jumping well in the long jump and high jump. He’s been really consistent in all his jumps.”

“I just tune everything out,” Stowasser said. “I don’t hear anything around me as I’m running up. I just don’t think about it. I just attack it and focus on my form. After that, it works itself out.”

Stowasser was introduced to the high jump as a freshman. After a slow start to his freshman season, he improved to the point where he qualified for the Division 2 state meet and placed second with a jump of 6-5. He had his sights set on a state title his sophomore season before it got wiped out due to the pandemic.

“First of all, he’s just got some God-given talent,” Pryor said. “He has put some time in. He’s done some travel track. The main thing with him is he’s just got so much athletic ability that the key is just keeping him healthy and reducing the number of events we put him in. He’s just been jumping lights out, he’s been looking great.”

For Stowasser, overcoming the challenge each jump represents pushes him to new heights. He hopes to finally achieve his goal of state titles in the long and high jumps.

“I’ve watched people do it and have seen how much of a challenge it is,” he said. “I figured why not give it a shot and see how I can do? It’s worked out pretty well so far.”

BERRIEN COUNTY — Berrien County will host its annual Peace Officer Memorial Day Service at noon May 14 at the... read more