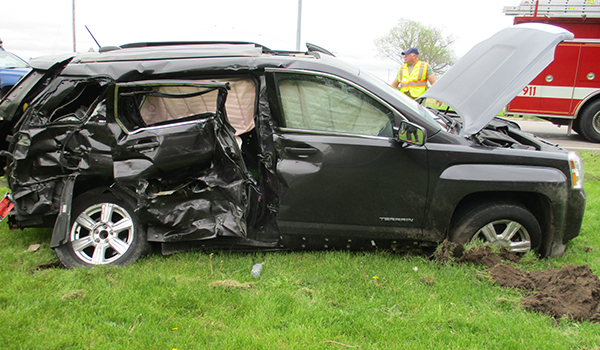 Sheriff Richard Behnke reported that deputies of the Cass County Sheriff’s Office responded to a two-vehicle traffic crash at the intersection of M 62 and Brownsville Street in Jefferson Township.

The crash occurred at approximately 12:10 p.m. Tuesday. The investigation of the crash showed that a car, driven by Courtney Wilburn, 26, of Mishawaka, entered the intersection westbound from the stop sign. Wilburn failed to yield right of way to a south-bound pick-up, driven by Justin Goins, 36, of Cassopolis.

Wilburn’s vehicle spun and came to rest in a yard. Goins’ pick-up rolled over multiple times and also came to rest in a yard. The trailer being pulled by Goins disengaged from the pick-up and traveled approximately 150 yards south of the crash. Wilburn was transported to South Bend Memorial Hospital via PrideCare Ambulance. Goins sustained a minor injury but refused medical treatment.

Both drivers were wearing their seat belts, and alcohol was not a factor in the crash, deputies reported.

Assisting on scene was the Cass Area Fire Department, the Michigan State Police and PrideCare Ambulance.