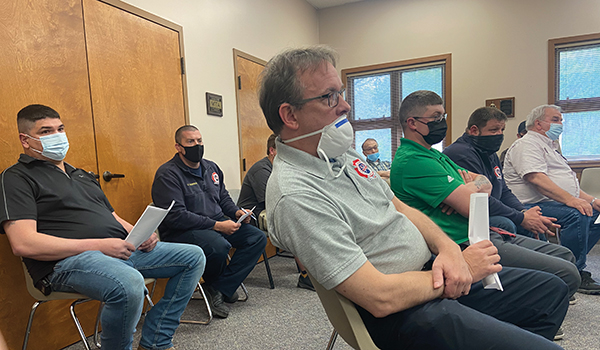 The comments come as final steps to hiring a fire chief have been taken, but official paperwork has yet to be signed. The previous fire chief for the Niles Charter Township Fire Department retired in August 2020.

“Over the past nine months, our fire department has been working and functioning with an ‘acting fire chief,’ utilizing most paid staff to assist in the process,” said Niles Charter Township Fire Department firefighter Josh Sherrick. “Can we be enlightened as to when we will have a full-time fire chief? I know there is a contract on the table that is waiting to be signed. We would just like to know when that process will be finalized.”

Township Treasurer Jim Ringler said he expected the paperwork to be finalized within a week.

“There was a negotiation going back and forth between Tim [Jesswein], the one we hired as fire chief who is ‘acting,’ and until that is signed – honestly, we met a week ago or so, and we went through the paperwork. It’s just there to be signed,” Ringler said.

Clerk Terry Eull said they would need to set a date for a Jesswein to transfer from acting-chief to fire chief.

Ringler said the terms are just waiting for signatures.

“We all want to get this done, trust me,” Eull said. “It’s been a long drawn-out process. We appreciate your patience.”

Alcala questioned the township’s hiring process as being “known” to hire full-time firefighters with personal and family connections.

“Some firefighters who have been on this department for many years will not even apply or have left knowing of the ongoing nepotism in the hiring process,” Alcala said.

During the last hiring process, to hire a full-time firefighter to step into Jesswein’s role when he begins as the department’s fire chief, Alcala described his bid for the position.

“I was told [by members of the department] that I wouldn’t be hired before starting the process. I chose not to believe it. I was told I was a second option,” Alcala said. “I went to the hiring board members and asked why I wasn’t chosen, and I was told that it was basically the flip of the coin, that [both candidates] were both very similar when it came out to experience, and for the life of me I cannot accept that answer.”

Alcala said he had 10 more years of experience as a firefighter than the person the township hired, has run calls as a command and has driven each vehicle.

“I want to see a change for the better in the process,” Alcala said.

Ringler said on Tuesday it was “unfortunate” that Alcala feels the way he does about the hiring process.

“There were some pretty blatant claims with no justification behind them, in my opinion,” Ringler said. “I think the board actually went above and beyond when we decided that we would only take applications from within our own volunteer department.”

Ringler said the hiring board received eight applications from volunteer firefighters. The applicants then had to pass a written and agility test to get to the next step in the process.

“[The hiring board] did not set the criteria; the acting fire chief did,” Ringler said. “With that said, there were only two that passed both tests. They were right next to each other as far as test scores.”

Resumes were submitted and open meeting interviews were conducted by the township.

“Both interviewed very well. They’re both volunteer firemen. The differences between them – one has more time as a volunteer fireman, but Jordan [Johnson, who was hired] has a bachelor’s degree. He’s got things that Eddie [Alcala] doesn’t have. It’s not any one factor.”

Ringler said he did not know about whom Alcala thought was connected to whom to get a hired spot on the department.

“We tried to keep this the most open and transparent all the way through,” Ringler said. “It was very unfortunate that the person who didn’t get selected sort of comes in and blasts the board. For all of these claims that I don’t think he has anything to back them up. If he does have that, bring them forth.”