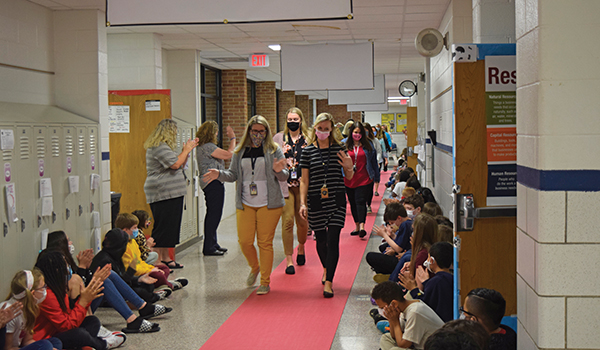 NILES – At Ballard Elementary School, a series of announcements came over the intercom Monday morning instructing teachers to leave classrooms for a secret meeting.

Teachers were taken to a separate room as administrators and staff members stepped into classrooms to take care of the students and let them know what was about to happen. A red carpet was rolled out around the school, and around 500 students were led outside to sit along the hallways.

Teacher Appreciation Week had kicked off at the school.

“We’ve rolled out the red carpet, which is something you do for a fancy and very prestigious event,” came a voice from the loud speakers in the hallways. “We want to recognize [teachers’] talents and everything they do for Ballard.”

Students were reminded to sit down and keep their hands to themselves, but were welcomed to clap and cheer for teachers they recognized. Then, music began to play, and 29 teachers were led in through the front door.

“Happy” by Pharrell Williams played in the hallways and students erupted into singing, cheering and waving as their current and former teachers walked the red carpet around the school.

Teachers like Taylor Van Niel, kindergarten teacher at Ballard Elementary, were surprised by the celebration.

“We got a note on Friday saying to meet at the flagpole at 10:15 a.m. It was not expected, but I had a little bit of an idea something was going on,” Van Niel said.

After walking the red carpet, Van Niel said it was a good kickoff to the week.

“It was really cute and heartwarming, seeing old students I had and students I could have,” she said.

Ballard Elementary School Principal Jennifer Shabazz organized the event to kick off the week for the teachers at the school.

“We wanted to do something that is not just a tangible, like a lunch and things like that. There are special things every day this week, but this was the big kickoff to get all the kids involved, have the office to come down and get involved, and show [the teachers] we appreciate all they do,” Shabazz said.

Shabazz said the schools try to celebrate their educators each year through the week, but this year was even more important.

“Last year was very difficult because we were virtual. It was hard to do,” Shabazz said. “They’ve had a tough year, and they’ve overcome every obstacle beyond what we could imagine.”

Throughout the week, teachers will be treated to snacks and a meal, as well as a “thank you” from the school’s PTO.

“We really wanted this so that they know they are as amazing as they are,” Shabazz said of the teachers at Ballard Elementary School.