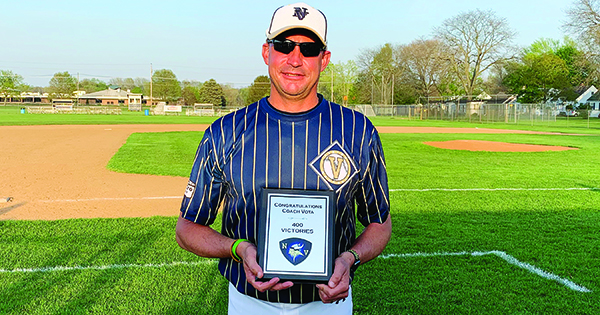 The Vikings swept the visiting Bobcats by identical 13-3 scores to give Vota the milestone.

Vota was quick to point out the players and assistant coaches over his 23-year career that helped make Tuesday possible.

“There have been a lot of great players through the years,” he said after the Vikings completed the sweep, and he was showered with water by his players. “I think about all the assistant coaches that I have had that helped make this possible.”

The moment was made even sweeter for Vota as both of his sons are members of the Niles varsity squad. Cade Vota is a senior catcher, who will play collegiately at Butler University next season. Gage Vota is a sophomore, who plays a variety of positions.

“My sophomore year, we had a really good team, and we thought we were in a good spot to get it,” he said. “Things just didn’t pan out. So, this year, we kind of came into it with a vengeance and we knew we were close, so we had to get it for him. As far as being a son, it is a pretty unique experience to be out here on the field with my dad when he gets his 400th win. It is a pretty sweet thing.”

Christopher Schueneman played on Vota’s first Niles team. He was excited for his former coach.

“Coach Vota was and still is a great example of what effective coaching is in high school athletics,” he said. “When he first arrived at Niles, he brought with him an ability to motivate and push players to be their best. From 5 a.m. conditioning to mid-season practice fungo competition. He taught us ‘we before me’ mentality. His mentor-ship helped me get to the next level and play Division II baseball and also helped shape my coaching approach once I graduated from college.

“To see him still coaching, joking with current and former players, and producing quality baseball season after season shows his love and dedication to the students and the game.

Four hundred wins is a huge milestone. To do it with class, respect and keep the game just as fun as it was with win No. 1 as it looked with No. 400 is equally impressive. Mike won’t take any credit for the wins. He’ll give it all to the players, but he’s a great coach and deserves to be recognized for it.”

Another former player, Matthew McLaughlin was also happy for his former coach.

“I know he doesn’t know this, but I appreciate the trust coach Vota put in me as a young player,” he said. “He allowed me to make mistakes on the field as an underclassman, which ultimately taught me resolve. He put me in a position early to learn, adapt to the new speeds of the game, and at times, fail. But his belief in me never wavered. That meant a lot to me and still does today. Four hundred wins is an incredible feat. Coach Vota’s dedication to Niles baseball is first-rate. His dedication to the school and the community is equally as impressive. Congratulations, coach Vota. How about 500?”

Brandywine got off to quick starts in both contests, but were unable to maintain the momentum.

Brandywine (5-5) led 2-0 in both games before the Vikings got the bats rolling. Niles has scored 13 runs in four consecutive contests. The Vikings have scored 13 or more runs in six straight games.

After falling behind in the opener, Niles (10-1) scored three runs in the bottom half of the first and second innings to take a 6-2 lead over the Bobcats. The Vikings put the game out of reach with a five-run fifth inning.

Niles finished the game with 11 hits, including a double and a home run by Jude Abbadessa. Abbadessa’ two-run home run in the sixth inning ended the contest.

Also picking up doubles for the Vikings were Mason Waggoner, Cade Vota and Jadon Hainey.

Gabe Gouin and Jamier Palmer both doubled for the Bobcats.

Drew Racht picked up the win for Niles. Cam Barrier took the loss for the Bobcats.

In the nightcap, Brandywine again led 2-0 before the Vikings scored a run in the bottom of the first and then took the lead with three runs in the third inning. Niles broke the game open with four runs in the fourth and five in the fifth inning.

The Vikings finished with 11 hits, including doubles by Waggoner and Abbadessa. Palmer had a triple for the Bobcats.

Abbadessa picked up the win in relief of starter Gage Vota. James Barnes suffered the loss for the Bobcats.

“They were better than us today,” said veteran Brandywine Coach David Sidenbender. “I thought we hit well at times, and we are having better and better at bats as we see more and more live pitching. I felt we kept battling the whole day. Congratulations to coach Vota.”