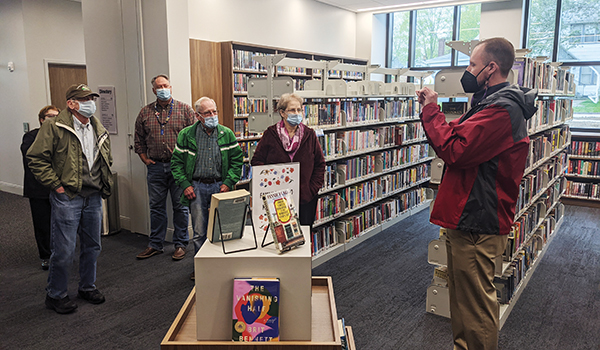 DOWAGIAC — The Dowagiac District Library rolled out the red carpet for the Dowagiac Rotary Club on Friday.

Library Director Matthew Weston took members of the Dowagiac Rotary on a tour of the new-look library, which has been under construction in some way, shape or form for more than two years.

The tour was the first official group tour Weston has done for the library, which will host its ribbon-cutting ceremony at noon Saturday, May 15 in front of the Commercial Street entrance.

“It’s exciting,” Weston said. “We’re really looking forward to seeing everybody with the fully open building. We’ve kind of just been showing people bits and pieces up to this point, and now it’s almost time to get the whole traffic flow going. We’ll be trying to figure out what we need to move around and what we need to switch around to make everything better.”

Weston walked the group through the first floor of the extended wing, which includes a community room, a kitchen area, study rooms and a quiet reading area. In addition, it also features one of two computer stations the library will host.

“We have three computers operational right now,” Weston said. “This is designed for and will have six computers, but right now, we only have three for spacing. We’re going to have another table of eight in a space currently undergoing renovation. Once that’s ready, we will have 14 computers total.”

The back of the extended wing offers guests a fireplace area to read by, as well as a wall that will be dedicated to community artwork. The library’s audiovisual section will also be located in the extended wing.

“DVDs are still really popular with all the streaming services,” Weston said. “A lot of people still really like them, so we’ll keep growing that collection.”

The back of the original wing connects with the extended wing to create a wall inside of the building, where an entrance space connects both wings. A quiet room is located in the section which features one of the five original solid oak tables that have been in the library since its inception more than 100 years ago.

“This will be the only part of the library where we will enforce keeping your voice down,” Weston said. “Everywhere else, you can just chat away.”

Weston led the group up to the second floor, where youth services are located. The floor features children’s books, reading areas and a room dubbed the “SPARK Room” for children’s programs.

The original wing of the library will house the teen and local history sections of the library, as well as three study rooms guests can reserve for study groups, with one of the study rooms featuring the technology to host conferences.

Weston said adults will also be able to reserve these rooms for whatever work they need to do.

“I don’t know of any other place in this immediate area that has this,” Weston said. “We have the SMC students and others maybe that are home from college that will often come to the library and the first thing they ask is where can they plug in a laptop. Now they can sit anywhere pretty much and plug in their laptop and access the Wi-Fi. If they need to meet with a group or something, we have these rooms for them.”

Weston hopes guests will like the new layout, which he believes makes the different collections of books stand out.

“The collections are a lot more visible,” he said. “It’s spread out better, it’s organized, and I feel like everything’s more browsable and easier to discover.”

Weston said the library will have its soft opening Monday ahead of its ribbon-cutting ceremony in a few weeks to kick off what he is calling the “Grand Opening Week.”

“We’ll let people in it in kind of an official way to show them around,” Weston said. “We’ll have things to hand out. We have book bags with our new logo on them, we’ll have new library cards, we’ll have different giveaways and different little contests we’re gonna have.”

Weston is calling it Grand Opening Week in an effort to ease library traffic on opening to allow for social distancing. The library will hold tours and distribute items throughout the week so patrons won’t miss out on opening week festivities.

“People can kind of come at their own convenience,” he said. “We can give them tours and the  book bags. We have things to hand out that whole week things for people to see and do. People are welcome to come to the ribbon-cutting and be distanced outside to watch the ceremony. We have a bigger building, but then we’re also at a lower occupancy capacity so if we had a really big turnout for the ceremony, we wouldn’t be able to let everybody in at once. You’re welcome to come to the ceremony and if you didn’t feel like waiting to come in, you could just come back later in the week.”

SISTER LAKES — May is Mental Health Month and a local brewery will be crafting beer for the cause. Starting... read more