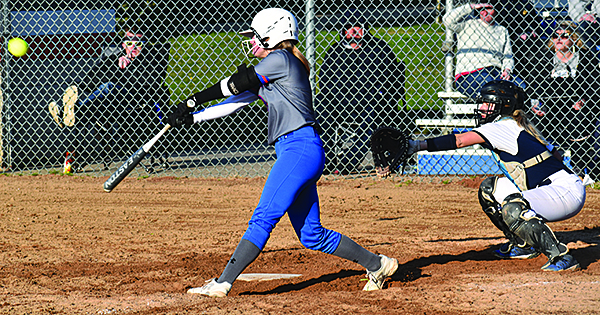 EDWARDSBURG — The Edwardsburg baseball team took care of business Thursday night against Otsego, sweeping the Bulldogs 10-0 and 14-2 at home while the softball team split with Otsego in a 1-0 loss and a 9-2 win.

“We really hit the ball hard,” said Edwardsburg baseball coach A.J. Gaideski. “We pitched well and played pretty good defense, for the most part. We had one bad inning on defense, but other than that, we played really well, defensively.”

The Eddies baseball team used an 8-0 in the fifth inning to put the game out of reach. Ethan Cebra, Sam Robinson, Landon Mikel, A.J. Obren, Andrew Colvin and Connor Ostrander drove in runs in the pivotal inning.

Obren earned a complete-game shutout on the mound for the Eddies, striking out five batters while allowing three hits and zero runs in five innings.

In game two, with the game tied 2-2 in the fourth inning, a Mikel single kicked off a 12-0 Eddies run to seal the win.

Ostrander had five runs, including a home run in the fifth inning. Colvin earned two RBIs with a home run of his own in the fourth. The Eddies finished with 10 hits in the game.

Sam Robinson picked up the win with three strikeouts, six hits and one earned run in five innings.

“Both of my pitchers played very well,” Gaideski said. “They threw pitches strikes, that was a good thing. Connor Ostrander hit that bomb there at the end but he’s been ripping the ball he’s just hitting to cover off of it and playing great at shortstop. Andrew Colvin as a sophomore, hit a home run today, so that was nice to see. We’ve just been hitting the ball really well. We hope we can keep it up.”

The sweep moved Edwardsburg to 7-2 on the season.

For softball, game one ended up being decided at the onset.

A Vanderlust double in the first inning scored what would become the game-winning run for the Bulldogs. Pitcher Emma Denison struck out seven batters while giving up two hits and one run in seven innings.

“It was a very close first game,” said Edwardsbuurg softball coach Dean Dixon. I think we struggled a little bit with the bats. I thought defensively we played pretty well. We have a young team and still have a lot of work to do.”

Dixon liked what he saw from his team in the second game, in which the Eddies bats came to life.

“I thought our intensity was a little bit better,” he said. “We started hitting the ball. When you can play defense, hit the ball and also pitch, you’ve got a pretty good chance of winning, and that’s that’s basically what we did the second game.”

Denison and Hanna Hartline stood out on the mound for Dixon.

“Emma did very well,” he said. “We didn’t help her much on offense. I had Hannah pitching in game two and she did a great job and we actually got some timely hits out of some kids that usually don’t so all the way from top to bottom in the second game I thought we did pretty good.”

Edwardsburg improves to 7-4 on the season as it gears up to play in the Lakeshore Tournament in Stevensville this weekend.

“It’s a pretty intense weekend,” Dixon admits. “Hopefully we can bring the intensity we did the second game.”

Elkhart teen given chance to keep domestic violence off record

In Cass County Court Friday, an Elkhart teen was given the chance of keeping charges off his record after he... read more