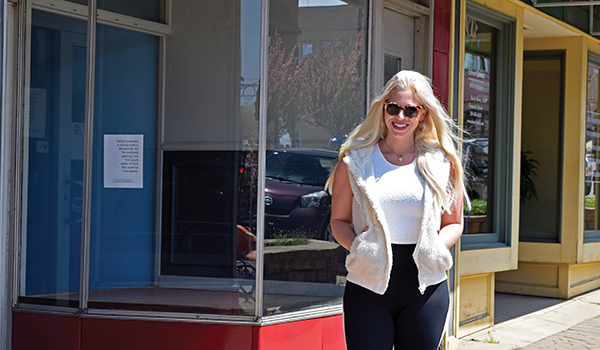 NILES – Movement is integral to Lacey Peters and her life as a fitness professional.

This weekend, Peters will celebrate that movement with the grand reopening of Lace Studio at 6:30 p.m. Friday and 11 a.m. Saturday at the former Inertia Cycleworks space, 211 Main St., Niles. Inertia Cycleworks is currently transitioning its business to Stevensville, and the building was a “perfect” space for Peters’ fitness classes.

“I’d be happier than happy to see you come through those doors that you see pictured come May 2021,” Peters announced on a Facebook post about reopening her fitness studio.

Once Peters was determined to reopen her studio in Niles, she was quickly connected to the owner of Intertia Cycleworks, Chris Pawielski, who had made moves to move the bicycle shop to its new home in Stevensville.

A longtime fitness lover, Peters first received training to lead fitness classes at the Niles-Buchanan YMCA. When she hosted her first fitness class, 65 people showed up. She turned her nervous energy into one that filled the room. From that point, she was hooked on teaching.

She opened her own studio in 2010 and closed it as her family grew and priorities changed.

She still taught at area studios and the area YMCA, and hosted classes virtually through the heaviest mandates of the COVID-19 pandemic. Having a new “home” for her business was a game changer for Peters.

“This is the biggest space I’ve ever been in,” Peters said of her new business’ home.

She also is not going to go it alone – Peters said she has a small group of group fitness instructors who are coming on board with her.

Once she announced the return of Lace Studio to downtown Niles on her Facebook page, she had past students reach out in numbers.

“It is amazing to reopen. I’ve had people reach out to me that I haven’t seen since 2013 when I closed the studio,” Peters said. “They’ve been waiting for me [to reopen], and I didn’t know.”

About a month ago, Lacey Peters was considering leaving the fitness industry altogether, a place she worked to cultivate a community and expand her professional offerings in since 2007. Peters said she looked into what it took to become a real estate agent, and then she had an epiphany as she thought about the multiple certifications she already earned, training she has invested in and connections she has made through her first love: fitness. With that in mind, she doubled down on finding a way to teach group fitness classes in her own studio again.

Now that she is returning to Main Street in Niles, Peters could not be happier.

Peters is still finalizing class schedules for her space, but announced on Facebook that her Zumba with an ab workout will be the studio’s reopening feature class. She hopes to bring a variety of classes, for all fitness levels, to students at an affordable price. She intends to have an unlimited class option as well as drop-in pricing.

“Thanks to my biggest fans, my friends and family,” Peters said. “I’m living in Elkhart, but Niles is home. This is my home.”