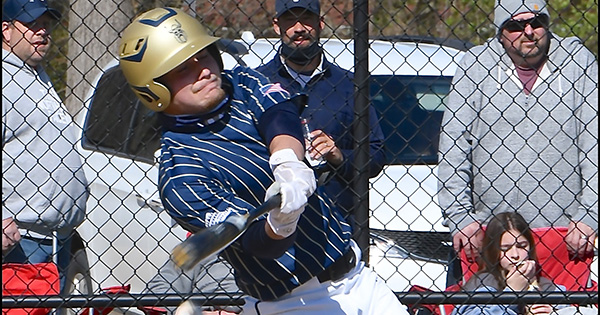 The Niles baseball team swept St. Joseph on Friday to improve to 9-1 on the year. The Vikings host Brandywine Tuesday at 4:15 p.m. (Leader photo/KELLY SWEENEY)

ST. JOSEPH — Visiting Niles baseball scored 13 runs in both games of its non-league doubleheader sweep of St. Joseph on Friday.

Jude Abbadessa and Gage Vota combined on a five-hitter as Niles won the opening game 13-3 in six innings.

The Vikings finished with 10 hits, including a double by Mason Waggoner.

In the nightcap, Chase Lotsbaich earned the victory with relief help from Hunter Fazi.

Niles had 13 hits in the second game, including a double by Fazi.

The Vikings are 9-1 heading into Tuesday’s BCS Red Division showdown with cross-town rival Brandywine. The first game is set for 4:15 p.m.

Edwardsburg pitchers held Dowagiac hitting to a total of four hits in the doubleheader.

In the first game, the Eddies finished with eight hits, including a pair of doubles by Connor Ostrander, and doubles from Nate Dalenberg and Obren.

Henry Weller had a double for the Chieftains.

In the second game, Edwardsburg banged out 15 hits, led by Logan McColley, who tripled and hit a home run. Ostander had a double and a home run, while Robinson and Tabor Lock also doubled.

Cam Barrier tossed a four-hitter for the Bobcats in the opening game, which they won 5-1.

The Shamrocks rallied to take the nightcap 8-7.

Brandywine (4-2) had seven hits in the open, including a double by Kendall Chrismon and a triple by Jamier Palmer.

The Bobcats had six hits in the nightcap. Gabe Gouin and Barrier both doubled. Micah Gamble took the loss for Brandywine.