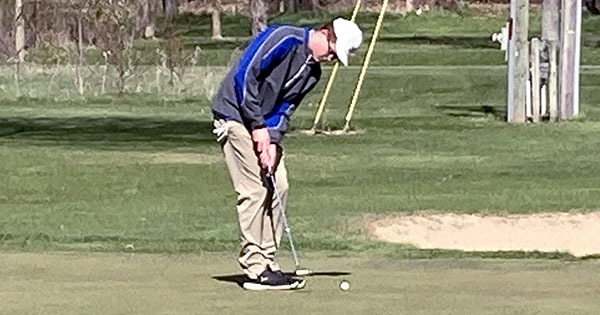 The Eddies shot 185 as a team to easily defeat runner-up Sturgis, which finished with a 209, and a short-handed Dowagiac team, which shot 287.

“I’m really proud of our team,” said Edwardsburg Coach Jeff Kozinski. “These kids are grinding it out in practice through the snow and sleet. The hard work is paying off. With hard work, I think we can get to where we need for the conference championship and state tournament. The kids are ‘trusting the process.’”

Emenaker finished with a 41 to earn medalist honors for the Eddies, who also had Mason Crist (45) and Aiden Mclue (47) break 50. 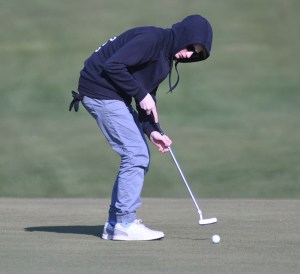 Dowagiac, which has been fighting COVID-19 quarantine issues the entire season, had five players available for the varsity match on Thursday. As has been the case so far in 2021, Chieftain Coach Bob Turner had to mix and match varsity and JV players to put a team on the course.

“It was a tough day,” he said. “And, it has been a rough start to the year. Missing the season last year has taken its toll on all of the teams. COVID is still having an effect on the team as we are having kids put in quarantine and missing out on things. We have played varsity matches with players that would normally play JV.  It is an important step to play JV first and feel comfortable playing in competition.

“We have thrown some players in the fire. but they will end up in a year or two being better off because of it. We are taking our lumps, taking what is thrown at us, staying positive and getting better.”

Abraham Guernsey led Dowagiac with a 54. He was the lone Chieftain to break 70 on the day.

“On the bright side, Abraham Guernsey has played all three varsity matches and his score has dropped each time with scores of 56, 55, 54,” Turner said. “Hopefully we can have some weeks where everyone is available and we can show some improvement and build some momentum.

Edwardsburg and Dowagiac will compete in Wolverine Conference Jamborees on Monday before traveling to Niles on Tuesday for the annual Leader Cup, presented by Leader Publications. Play is scheduled to begin at noon at Orchard Hills Country Club. Edwardsburg is the defending champion.

BUCHANAN — Visiting Dowagiac rebounded from its first loss of the season with an 8-0 non-conference win over a short-handed... read more