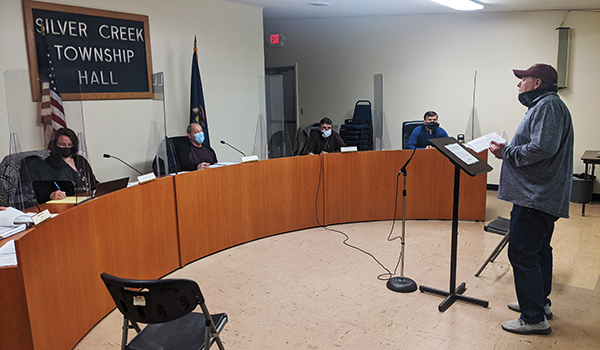 SILVER CREEK TOWNSHIP — A township resident will now be able to pursue a construction project on their property thanks to the Silver Creek Township Zoning Board of Appeals.

MacGregor requested a 21-foot variance from the required 30-foot setback in order to permit him to construct a new 32-foot by 28-foot, 32-foot by 20-foot accessory building on the eastern portion of the property, a triangle-shaped portion formed by the intersection of Lakeshore Drive and Karl Street.

The proposed structure will sit approximately the same distance from Karl Street as the existing house and two-car attached garage.

A variance is a specific waiver of requirements of the zoning ordinance typically granted when the property owner can demonstrate that existing zoning regulations present a practical difficulty in making use of the property.

According to the Zoning Board of Appeals’ standards of review, a variance may be allowed by the board of appeals only in cases where there is reasonable evidence of practical difficulty — the strict application of the ordinance to the property precludes the ability of the petitioner to pursue a use permitted in the land use district in which the property is located and results in significant economic injury to the petitioner.

“A lot of times, people want to build structures bigger than what’s allowed, right next to the house where it’s not allowed or next to the road where it’s not allowed,” said Thomas Brown, chairman​ of the ZBA. “But with this, they’re trying to jockey and put it in a proper place but it’s impossible due to the shape of the lot. That’s considered a practical difficulty. We relaxed the technical wording of the law and we approved the variance.”

A variance can be approved if all of the following conditions are addressed:

Having moved to Dowagiac just over a year ago, MacGregor was looking to find a place on his irregular-shaped property to build a structure to house vehicles, his boat and other equipment but was unable to do so without requesting a variance from the township.

“We take a situation somebody wants to build the structure or and in some cases such as this, the law isn’t really clear,” Brown said. “It’s not cut and dry. With the odd shape of this lot and the modest request, we felt it was best to approve this variance.”

While the size of the proposed structure is allowed by law, Brown said the extreme narrowness of the lot in the conjunction with the roads made it impossible for MacGregor to comply.

“No matter how they tried to put this, they just couldn’t,” Brown said. “I went out there and looked and there’s nowhere you could move it because a lot is so narrow. That’s why we are the board of appeals. We review the situation and try to make a common-sense solution.”

His request was met with opposition from Thomas Blake, a neighbor of MacGregor’s who submitted a letter of opposition to the township.

“Laws must be enforced, not changed to allow this oversized structure,” wrote Blake. “It will create a visual hazard for traffic exiting Lake Shore Drive onto Karl Street. It will disturb water run-off and cause flooding conditions to all the properties along Lake Shore Drive. Lake Shore Drive was elevated during the sewer project and paving was elevated which already causes water and entry problems to my home lot. My well is also located adjacent to that property adding a danger of contamination of my well. … With my property being directly downhill from that corner lot, any disturbance of the property could also contaminate my well. The property already has a garage and one garage should be enough for anyone.”

In response to Blake’s letter of opposition, MacGregor said that the project would not disturb the natural drainage that runs through the middle of the property.

“We won’t be disturbing any of the trees in the brush line,” he said. “We’re cleaning up the brush line, but you will still have the brush as close to the road as it is today. I don’t think it would disturb the land. I’m not putting sewer in it or anything like that.”

While variance requests are brought to the board at a steady clip, Brown said that a practical difficulty of this nature is fairly uncommon.

“We had one before that was challenging like this one,” he said. “Boulders, ravines and power lines on your properties can be practical difficulties. There’s not much you can do about them. We just tried to apply a little common sense and see if we can come to a mutual agreement. … I’m glad we were able to help out.”

NILES — Thanks to a recently awarded grant, one area nonprofit is taking steps to help community members keep their... read more