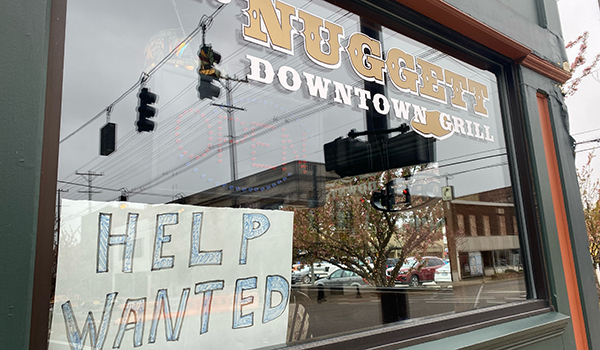 SOUTHWEST MICHIGAN – Bold letters sit in windows and on signs at many restaurants in the southwest Michigan area passing along the message that another establishment is looking for staff.

Inside are smaller staffs, who are becoming more and more tired as they try to keep businesses
running.

Wynter Dulemba, manager of The Nuggett Downtown Grill, 202 E. Main St., Niles, has been keeping the restaurant running with its reduced staff size. A large “now hiring” sign is visible from the road to passers-by, but Dulemba said the applications she does receive from potential job seekers are not viable.

“We get applications that have nine [digit] phone numbers,” Dulemba said. “I don’t have completed applications with ways of getting a hold of people.”

Dulemba said people will come in and fill out an application and not show up to interviews. Sometimes, they will work for a week and then leave without another word. One former staff member never returned from a lunch break.

“I’ve never seen it like this, honestly,” she said. “We’ve just got people who don’t want to work, or are collecting unemployment, or are too scared to come back to work because of COVID-19.”

Staff members who have stayed with the restaurant work more shifts and have stepped into multiple positions. Servers might work one shift serving and one in the kitchen in the same day. Dulemba herself regularly has a large section of tables, works the bar, handles to-go orders and answers the phones.

She is grateful for the team that does keep the restaurant functioning.

“I hope that my customers are kind to the ones who did show up,” she said. “I have people who just won’t show up or call.”

“We feel fortunate to have been able to find staff,” said owner Rachel Wegner. “It has been a struggle for a while. Unemployment has created a situation for people to rely on and not have to work.”

Wegner echoed Dulemba’s sentiments about job seekers filling out applications, but failing to show up for interviews.

“It’s unfortunate that we can’t report back on the people that do apply but don’t really plan on working,” Wegner said. “I know so many businesses right now that are struggling to hire and have to close certain days or hours due to lack of staff.”

Thursday, local groups and agencies met to help find a solution to the problem.

According to the data analysis, in February, when restrictions on indoor dining were lifted in Michigan, about 30 percent of small businesses remained closed. The number for Cass, Van Buren and Berrien counties cumulatively showed about 800 businesses closed, with 410 being in Berrien County alone. The data set defined a small business as having 100 employees or fewer.

Arthur Havlicek, president and chief executive officer of the Southwest Michigan Regional Chamber, said there was “nothing fundamentally wrong” with the jobs market place.

“The reason it is effecting so many different employees across a diverse set of industries is because it is a macro policy problem,” Havlicek said.

He said the combination of federal pandemic unemployment, state benefits, relaxed requirements to seek work have made a difficult situation for businesses.

“These employers have to compete with the unemployment agency for talent,” Havlicek said. “That is not a competition they can win.”

Signing bonuses, relocation bonuses, housing and other perks seemed to have mixed results for the panelists who voiced they had worked to make their positions more lucrative.

“In my opinion, short staffing is a pandemic we are seeing,” said Brady Cohen, general manager of the Inn at Harbor Shores in St. Joseph.

With a reduced, core staff keeping the Inn at Harbor Shores running, Cohen said workers had been picking up more duties. His chef is working 80-hour weeks. Cohen himself has jumped behind the bar to keep drinks flowing.

Elizabeth Hacker, director of sales for the Inn at Harbor Shores, spoke about taking on multiple roles throughout the day, especially during events. With couples who postponed weddings in 2020, she’s worried about what it means for the coming warmer months.

“We want to give them the experience that they want,” Hacker said. “I’m mopping the floor at midnight and coming in the next day to answer emails from all the clients that I missed because I was busy doing the event. It’s been very difficult.”

“I think I’m in a unique situation where I’m about five miles from the state line with Indiana,” Downey said. “What we’ve found is that when we had opened up for carry-out, Indiana was open, and people would go down there.”

The closures to indoor dining between Thanksgiving and Christmas were the toughest, Downey said.

Al Pscholka, vice president of public relations and government affairs with Kinexus Group, suggested it may be better to look at labor market numbers as opposed to unemployment rates. He said the labor market shrinking, becoming older and having less educated persons in it would not help the economy grow.

“When the state publishes the unemployment rate, that’s not really the greatest marker to go by,” Pscholka said.

He said one way to stimulate the workforce again would be to end added unemployment benefits.

“President Obama ended extended unemployment benefits at the end of 2008/2009, when we were coming out of the financial crisis. That’s when we started to see the uptick in the economy,” Pscholka said.

SOUTHWEST MICHIGAN —Heather Cole, director of advocacy and public innovation at United Way of Southwest Michigan, is one of only... read more