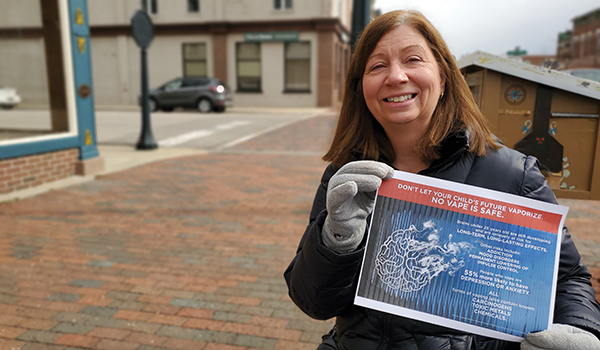 CASSOPOLIS — Next month, one Cass County organization is taking a stand against vaping.

The CASS Coalition — a task force created by Woodlands Behavioral Health devoted to addressing alcohol, tobacco and other drug issues in the area — has teamed up with United Way of Southwest Michigan and Southwest Michigan Behavioral Health to launch a new anti-vaping campaign. Starting next month, information cards will be sent out to homes in Cass County with facts about the harmful effects of vaping, and the CASS Coalition will be spreading information on its social media platforms.

“There is this belief that vaping is safe, especially when people compare it to cigarette smoking,” said CASS Coalition Coordinator E.J. McAndrew. “There are a lot of things that cigarettes have that vapes do not, but on the other hand, there are a lot of things in vapes that are not in cigarettes. There are up to 8,000 chemicals found in vaping products. In all our research, the one thing we have found is that there is nothing safe about vaping.”

The effects of vaping include:

While McAndrew said she does not have specific numbers for vaping use in Cass County, she knows it is hitting Cass County youth hard.

“I know that in the schools, it is a constant problem for the principals and the resource officers,” she said. “We know we have a problem. There is a decreased perceived risk among teenagers, and that is always a precursor to use.”

While McAndrew said she knows the CASS Coalition’s campaign will not be able to curb vaping use among children or adults altogether, she hopes it will correct some of the misinformation surrounding vaping.

“People don’t know the risks,” she said. “They hear what they hear, and they don’t have time to research every little thing they hear — no one does. We are providing them with straight facts, complete with top-notch sources. We want to get this information out to parents, caregivers and adults who think that by using a vape, they are in some way or form making a safer choice. It is still damaging your lungs.”

If the campaign can make a difference in just a few people’s lives, McAndrew said it would be worth it.

“We want to raise general awareness,” she said. “Ideally, this will lead to stronger policies regarding use and sales.”

SOUTHWEST MICHIGAN – In the U.S., sexual violence impacts more than 40 percent of women in their lifetime, according to... read more