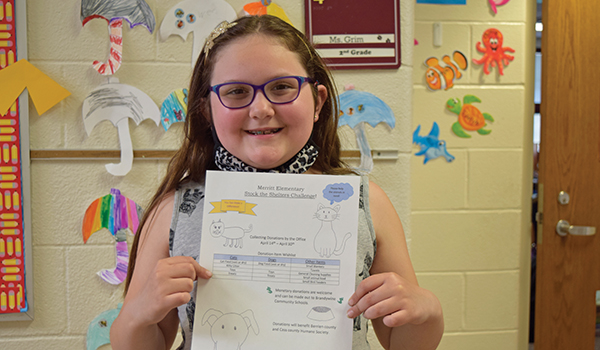 NILES – The students at one Niles elementary school are taking action to help animals in need across Berrien and Cass counties.

Evelyn Ulrich, a second-grader at Merritt Elementary School in Niles, was inspired to organize the drive after she read a story in class with her teacher, Kelsey Grim.

“We read a story about a petition at school,” Ulrich said.

Ulrich said the story focused on children who wanted a local park to stay open, so that they would not have to play in the streets after it closed. Some of the lessons included how to make a petition and work with local government and how to talk with members of the community about one’s concerns.

Ulrich wanted to find a way to help endangered animals, but learned of different ways to make a difference right at home.

“My mom and dad said it has to be something you want, like to help keep parks open later or to build a building. People already save endangered animals,” Ulrich said. “That gave me ideas that we could donate or make donations. I really like animals, especially cats. How about we do donations to the humane society?”

Ulrich called the humane society and animal control with her parents and learned about some of the organizations’ needs. In addition to food, cleaning supplies and blankets, she learned about another unique need one of the shelters expressed wanting: bird feeders.

“When the cats are bored inside, they thought they could look out the window [at the birds],” Ulrich said.

From there, Ulrich and Grim got more of the school involved.

“We walked with Mr. [Matt] Severin, and he set it up so we could work with the whole school and accept donations,” Grim said. “We can make a bigger impact and help more animals.”

Grim’s class decorated the donation box that sits in front of the school office with drawings of animals. Ulrich and Grim added a few photographs of animals currently living at the two organizations so that those donating could see the pets that the supplies and money would be going to help.

“I see when kids get passionate about something, and I want to support it,” Severin said.

When Grim brought the idea to the office, Severin was excited to give Ulrich and her classmates a boost to get the rest of the school involved.

The drive will be ongoing through April 30.