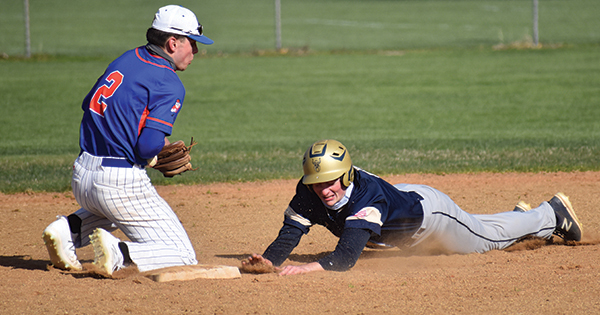 The Vikings would answer at the top of the sixth inning with Hainey on third base, as a Lotsbaich single on a ground ball allowed Jaden Hainey to score what would become the game-winning run.

“It’s early-season baseball,” said Niles coach Mike Vota. “That’s kind of where we are. I saw some good things, but there are a lot of things we need to work on. I thought that for the first eleven things we played, we played pretty good baseball today both ways. We all have stuff to work on, but it’s not too bad.”

The Eddies regrouped in the second game, using a 10-0 run in the fifth inning to take control of the game. Pitcher Austin Bradley gave up 10 earned runs, five hits, walked three batters in the fifth inning, and was replaced by Mason Waggoner.

Obren allowed six hits and struck out two Vikings in four innings to pick up the win.

Gage Vota pitched four innings and struck out three Eddies and gave up three hits and three walks in the loss.

“I think they just kind of ran out of pitching a little bit,” said Edwardsbuurg coach AJ Gaideski. “They have games tomorrow, so they couldn’t hurt anybody. It was just hard to tell anything. My pitchers did a nice job throwing strikes, that’s what I like to see. My catcher did a great job. Everybody played well. We played as good as expected, I think, for the first day and hopefully, we’ll keep getting better throughout the year.”

The Vikings are hoping for a strong showing in Dowagiac on Saturday.

“That’s why we had to conserve some pitching at the end of this game,” Vota said. “I can’t burn everybody else and then have nobody (for today).”