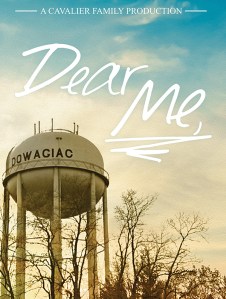 Some of his earliest memories include pacing the aisles of Family Video searching for the perfect film to watch. Now, more than 20 years later, the former Dowagiac resident aims to direct a film of his own.

Herter is raising funds to produce his independent film “Dear Me”. Described as “a mix between ‘American Pie,’ ‘Forrest Gump’ and a John Hughes movie,” the film is a coming of age tale set in the 2000s that is based on Herter Jr.’s experiences growing up in Dowagiac.

“Throughout my life, I’ve always wondered if the random, embarrassing things that have happened to me would be just as funny to everyone else,” Herter said. “This story is really like a John Hughes movie where you have your elements of trying to find out who that individual is and trying to find out who you are while you have friends guiding your way.”

Herter moved to Dowagiac from Niles in elementary school and graduated from Union High in 2008. He moved to Lakeland, Florida after high school, where he graduated from Keiser College with a computer graphic and design degree in 2010.

It was there where his interest in movie production began.

“I did short movies in college,” he said. “I did all sorts of school projects and I loved every minute of them. A few years ago, I thought to myself that if Kevin Smith can make ‘Clerks’ for $12,000 back in the ‘90s and then make ‘Chasing Amy’ for $200,000, why can’t you, me or anyone else make a movie and actually take that chance? I took that chance.”

Herter created Cavalier Family, a production company, for the project. He also started an Indiegogo fundraising page and set the goal at $200,000, which would cover expenses including Better rented equipment, travel expenses, food on the set and submission fees for film festivals. There are several tiers of donations for interested parties, which would receive special perks based on the option they select.

Where a fundraising platform like Kickstarter releases funds only after the campaign reaches its funding goal, Indiegogo gives users an opportunity to choose between receiving funding as it comes in, or waiting to see if their target is hit.

The project is currently $670 toward its goal.

“It’s a lot of money,” Herter said. “But it would put us in a situation where everyone would feel comfortable. I don’t want anybody to pay anything out of pocket because they’re taking time out of their jobs and vacation days to come and help do this.”

The project’s demo tape — a rough draft of what donors can expect — was shot in Lakeland, Florida and is available on the project’s Indiegogo page. Herter hopes to shoot the film in Dowagiac and Niles, where it all began.

“I’ve already met with the mayor, and he likes the idea,” he said. “I’m still waiting to hear back from some business owners and schools. If that doesn’t work, I’m more than happy to film outside of the area, but I’d like to be able to film in that centralized location.”

If his film reaches his fundraising goal, Herter Jr. hopes to bring awareness to Dowagiac, the community that raised him to be the man he is today.

“I want to be able to showcase the beauty of this city,” he said. “The memories I have are thanks to this city. I want to be able to film downtown, film a football game and film inside the high school. I want to show all these elements that were important to not just me, but everyone in the city. There’s so much I want to do with this film to help the city grow and put Dowagiac on the map again.”

Herter Jr. is optimistic his project will reach its goal. Even if it does not, chasing his dream something he could never regret.

“Worst case scenario, it doesn’t happen,” he said. “But at least we tried. Everything is achievable as long as you try. If it doesn’t work out at least you will never have the regret of never having tried. If it does happen, I want to be able to inspire people to chase after their dreams. I want to be as encouraging to others as others were to me.”

Updates on Herter “Dear Me” project can be found on the project’s Facebook, Twitter and Instagram accounts. Project donations can be made through Herter’s Indiegogo page.