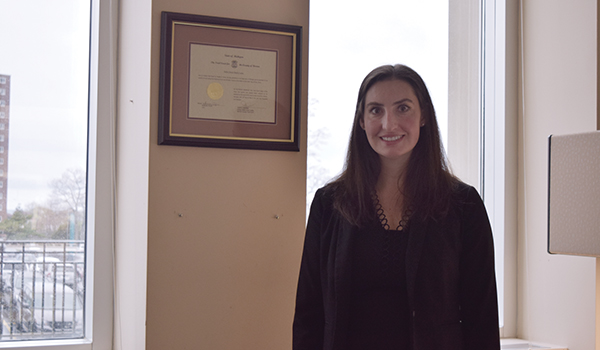 ST. JOSEPH – A lot has changed for Holly Lucas since she was crowned Miss Buchanan in 2008.

Today, Lucas is a prosecuting attorney working in the Berrien County Prosecutor’s Office.

Her office window overlooks the city of St. Joseph, with a view of the St. Joseph River on its way to spill into Lake Michigan.

She began in the prosecutor’s office in June of last year, when the courthouse was still completely closed to the public.

“As long as I’ve been here, it’s technically been closed. We just opened for a few things in April,” Lucas said.

Zoom meetings and limited in-person trials have set the stage for a different experience in the office for Lucas.

“People will talk about how this is not how they did it in the past. They used to bring in all the defendants at one time [into the courtroom],” Lucas said. “Now, they’re doing pretty much everything over Zoom.”

Virtual, nearly a year later, still has its challenges.

“From an efficiency standpoint, we couldn’t just stop doing things. I do hope it goes back to what everyone has referred to as ‘normal,’ but I’ve only known the Zoom-type aspects.”

The COVID-19 climate has been a departure from the familiarity that set the stage for much of Lucas’s life. Growing up in Niles Township, she graduated from Buchanan High school.

“I basically did everything in high school I could. Buchanan is pretty small, but I did National Honor Society. I was president and vice president of different clubs,” Lucas said. “I was very involved.”

In a staff report published by Leader Publications on Dec. 8, 2008, Lucas’ accomplishments listed included playing volleyball, varsity tennis and varsity softball. She was listed as being involved in student council for four years and was the treasurer as a senior. According to the report, Lucas had won sportsmanship awards in both tennis and softball, and was a fixture on the honor roll for all four years of high school.

At the time of the 2008 report, Lucas listed her goals as to study political science and economics at Saint Mary’s College, go to law school and become a legislative assistant to a member of Congress.

She earned her bachelor’s degree in economics from Saint Mary’s College, and attended the University of Notre Dame’s Law School.

“I think all of those experiences probably led me toward being a lawyer,” Lucas said. “I’m also the youngest in my family. I have three older brothers. I’ve always been pretty competitive.”

After graduating from law school, Lucas took the bar exam in Illinois, Michigan and Indiana. She had her eyes on jobs in Chicago, but ultimately found work in St. Joseph.

She practiced transactional law, which works with business, commerce and money, for the first couple of years of her career. Today, she practices criminal law in the prosecutor’s office.

She in her current position, she works with many statutes, and works on interpreting and understanding the laws. She said some of the work is looking at ways laws could be written better.

“It’s not too far [from a legislative assistant],” Lucas said. “Legislative would be writing those types of things. Criminal law is by far the most interesting, so far. It’s lots of courtroom time. I like that.”

She currently lives in St. Joseph, with her husband, Justin Rodgers. The couple is expecting their first child in August.

“I’ve been relatively local my entire life. I like it that way, though,” Lucas said. “I contemplated moving to Chicago or somewhere bigger, but especially with the way my life is now I couldn’t imagine that.”
She enjoys being near to her family.

In the Berrien County Prosecutor’s Office, the attorneys take rotations at the county’s Niles courthouse building.

“I’m looking forward to that,” Lucas said. “It is a little bit closer to ‘home.’”

CASSOPOLIS — A change in leadership at the Cass County Veterans Affairs Office was welcomed with a standing ovation Thursday... read more