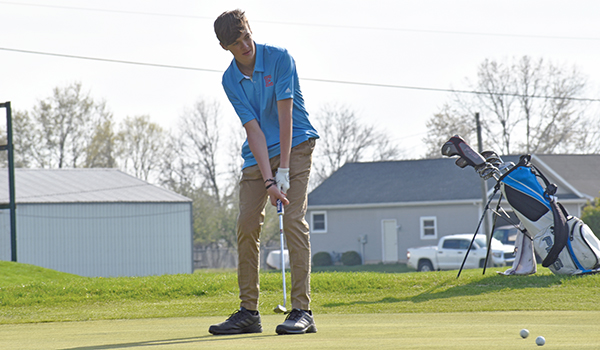 EDWARDSBURG — For the second day in a row, the Edwardsburg and Dowagiac boys golf teams faced off on the green.

The Eddies placed second with a score of 201, and Dowagiac placed third with 237 in Wolverine Conference Jamboree play Wednesday at Four Lakes Golf Course, 22786 US-12, Edwardsburg.

Led by medalist Austin Sanford’s 45, Sturgis edged Edwardsburg by three strokes to take first place with a score of 198.

Edwardsburg was led by runner-up Mason Crist who finished with a score of 46. Andrew Kurowski and Will Moore both scored 48 points apiece, while Reed Rosenkranz and Owen scored 52 and 54, respectively.

Kozinski was impressed with the play of his freshmen and sophomores and believes his upperclassmen will catch up, too.

“I think they’re just putting too much pressure on themselves right now,” Kozinski said. “It’s a matter of just getting settled in and working on their short game.”

“Jonny’s score was our best, which wasn’t great for him,” said Dowagiac boys golf coach Bob Turner. “Our group is almost all freshmen and sophomores. We haven’t had anything spectacular, but they got better and today was a lot colder so the conditions weren’t so good.”

Edwardsburg and Dowagiac were in Sturgis Tuesday for tri-meet, where Edwardsburg won with a team score of 205. Dowagiac was third with a 238.

“We did alright yesterday,” Kozinski said. “We didn’t hit our team goal of 168. It’s just a matter of getting kids to trust the process and getting them where they need to be. We improved our score today so we’re moving in the right direction.”

The Eddies and Chieftains are looking forward to taking the greens next week when they play at Hampshire Country Club, 29592 Pokagon Hwy, Dowagiac Monday.

“We’re plugging away,” Kozinski said. “It’s been a positive start to the season, and we hope we can continue to get better.”

DOWAGIAC — Four area residents were arrested Wednesday on drug charges following the execution of a search warrant in the city... read more