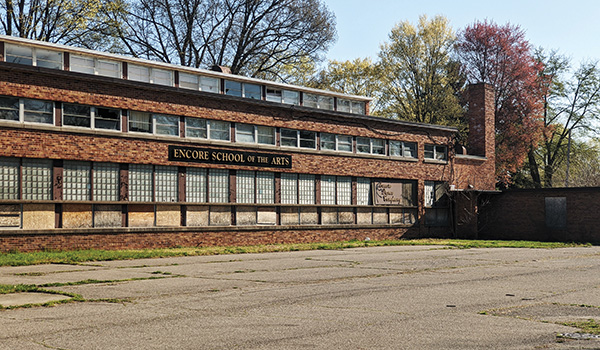 The Dowagiac City Council moved Monday to purchase the former Lincoln Elementary School, 407 E. Division St., for $20,000 for the purpose of redevelopment and blight removal.

The former schoolhouse, which was built in the early 1950s and last used by the Encore Dance Company, has been unoccupied since 2013. The property was once home to a boxing ring belonging to Muhammad Ali, which was used by local boxing trainer Walter Swann to train pugilists through the Police Athletic League.

While a developer was interested in transforming the building into an apartment complex in 2014, the project eventually died.

“Often you see these buildings fall down on themselves, get torn down or sit as a vacant lot for a period of time,” said city manager Kevin Anderson. “In this particular case, the bones on this building are really strong, and it has some really good potential for some nice multifamily development.”

According to Anderson, the city is purchasing the property from a southern Ohio man who bought the property a number of years ago at a tax foreclosure.

The move is the latest in the city’s attempts to address the four redevelopment projects determined by the community to be high priority in the city’s 2019 Master Plan Update.

According Anderson, the four properties are:

“When we updated our master plan a few years ago, the community indicated that this was one of the four priority redevelopment projects in the community,” Anderson said. “The council has been working pretty hard towards this project since then.”

The city has been working to identify potential investors, pinpoint potential state funding support and purchase the building so development can move forward in a timely manner.

“The state agrees with us that it is a building not only worth saving, but it’s close enough to the core of the city that they are likely to fund some portion of it. It’s just a matter of getting all of the parties and pieces moving together.”

“We’re happy to be able to get the property because this has been a blight in the neighborhood for a period of time,” Anderson said. “We’re gonna really work to try to get some things cleaned up so that that light that has been working in the neighborhood. I think from the standpoint of blight removal, helping the neighborhood out as well as working on a good solid development plan to take a building and make it useful again. We’re really excited about the possibilities.”

Anderson said the city has taken a number of interested parties through tours of the building that have development interests and has taken Michigan Economic Development Corporation representatives through to see what kinds of potential funding and resources are available.

“We’ve coordinated some meetings between developers and the MEDC,” Anderson said. “We think we’re working with a developer right now who could really make something happen, so we’re very excited that it’s not just about buying a building. We think we’ve got some folks who are going to be able to make this go forward.”

While Anderson is confident that the city will find a developer, he knows projects like this can take some time.

“A project of this magnitude and scale is going to be done in stages,” Anderson said. “I think there’s a very realistic option for this in the short term rather than the long term. This isn’t a five to 10-year project, this is a one to two-year project.”