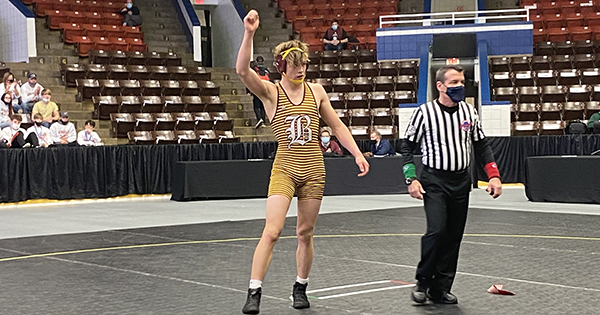 GRAND RAPIDS — The final weekend of high school wrestling turned out to be a successful one for area grapplers.

Hoover swept through his four matches at Van Andel Arena in Grand Rapids on Friday. He pinned Croswell-Lexington’s Aaron Lieber in 1:53 to start his title march. He then won back-to-back matches against Lowell wrestlers, winning by decisions over Tacho Gonzales 4-1 and Will Link 7-2. Link had defeated Hoover earlier in the year in overtime.

Hoover was not the only Eddie to earn a state placing on Friday. Caden Reece was seventh at 171, Tanner Hursh seventh at 215 and Tabor Lock eighth at 189.

Also on Friday, Dowagiac and Brandywine had had wrestlers earn All-State status as Wyatt Bailey finished third at 285 pounds for the Chieftains, while Hunter Heath finished third at 160 pounds at the Wings Event Center in Kalamazoo.

Both Bailey and Heath are three-time state placers. Bailey finishes the season at 29-1, while Heath was 31-3.

Cassopolis’ William Westphal finished seventh at 135 pounds in Division 4 at the Van Andel Arena in Grand Rapids on Saturday. Westphal finishes his three-year career with a 99-23 overall record.

SOUTHWEST MICHIGAN — As of Monday, Berrien County reported 11,969 COVID-19 cases and 232 deaths, according to the Michigan Department... read more